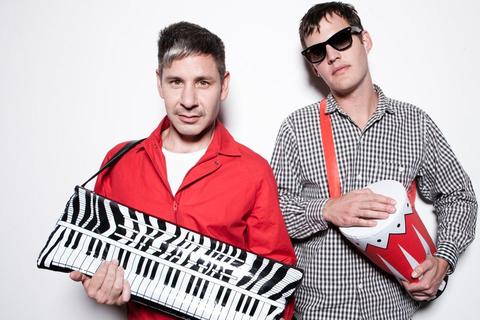 Listen to Once A Servant

Will Schwartz and the piano go way back, to when he was nine. "I've been attracted to the C chord and to A minor since I was a kid," he says. "I learned to play piano by ear, and it was always based on [starting with] a C major and going from there."
You could say Schwartz played his first gigs on the instrument. "We had this two-story living room in our house in New Jersey with a little balcony," he remembers with a laugh. "I would imagine I was playing for people down below. I would put on shows for the living room furniture."
With My Rocks Are Dreams, the debut album by his new group Psychic Friend, Schwartz updates California chamber or piano pop, aided by drummers Patty Schemel and Tripp Beam and instrumentalist-coproducer Bo Boddie. The result is the freshest and most personal chapter in Schwartz's musical story, one that has ranged from the guitar pop of Imperial Teen to the D.I.Y. dance music of Hey Willpower. "Literally, my life is in those lyrics," he says of the propulsive "Quality Control." "It covers my experience of being praised or shot down critically, of making music with or without an audience."
Clean and immediate, Psychic Friend's debut sounds like the moment Schwartz has found his voice, or unknown heights or depths of it. A love song grounded in the experience of everyday work, the pounding lead single "Once a Servant" revives the spirit of Jobriath and classic Bowie. "Water Sign" has a Gallic Serge Gainsbourg undercurrent. "Shouldn't Have Tried Again's" rendering of repeated failure matches the plaintive sunshine-y yearning of Harry Nilsson's sublime covers of songs by Randy Newman.
"In a simple way," Schwartz says of his album's title, "it resonates for me as going through a difficult period but retaining a sense of wonder, or the sensation in dreams that there's a better place. Over the course of making the album, that has come about. Things feel dreamier than they did when I started making it."
True to Psychic Friend's name, My Rocks Are Dreams also has a sense of unity and connection that draws from longtime friendships and family bonds for inspiration. Expansive, with a keen sense of drama and dynamics, "Softer Side" peels away layers of character and personality. "Never Burn, Never Bruise" stares down the trials of adulthood and addiction with a sound that's as sweet as Lennonesque milk and honey. "The Kids Are Ok" captures youthful indiscretion with an arrangement as bright and buoyant as vintage Van Dyke Parks.
"The nature of playing a piano and writing melodic songs, it almost brings you back to a sense of '70s songwriting," Schwartz observes. Yet while Psychic Friend' s piano-based immediacy sometimes has a kinship to Carole King's early solo work, or Burt Bacharach's hits for psychic and other friends, both the sound and the lyrical content is very contemporary. On tracks like "We Do Not Belong," Schwartz's voice possesses a free-ranging strength and flair it hasn't been allowed before. The result is an album with a unique "I" that wrestles with love and autonomy and an open-hearted "we" that suits outsider and underdog anthems.
"It may sound cliche," Schwartz says, "but [making the album] was a journey of the self. It feels really good to have completed it. Sometimes people go on these kinds of journeys and get sidetracked. A lot of things don't get finished. To have it all come together is very gratifying."
"I just found this place in my voice," he adds, "that feels very connected, that comes from playing the piano. And it feels good." On My Rocks Are Dreams, what feels good sounds even better.