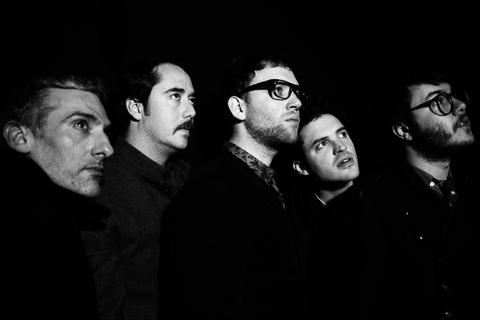 Caveman—a five-man vibe collective from NYC—released their first album in 2011. As first
albums go, CoCo Beware was something akin to a moody statement of intent, a blueprint for
a band quickly learning how to create horizon-wide rock songs that were equal parts intimate
and expansive. Initially self-released and later snatched up by Fat Possum for re-release in
early 2012, the record brims over with four-part harmonies, crystalline guitar lines, and tracks
that see-sawed between echoey lullaby (“A Country’s King of Dreams”) to shoegaze-by-way-of
classic-FM-radio sprawl (“Old Friend”). The album quickly elevated Caveman from local band to
watch to a sizable touring draw and formidable live act, as evidenced by stints on the road with
the likes of The War on Drugs and Built to Spill. Despite being the work of a brand new band,
CoCo Beware displayed a kind of Zen-like ease. It was the sound a five friends settling into a
nice groove; the music that happens when, for whatever reason, a lot of seemingly disparate
elements finally fall into place.

On their self-titled sophomore album Caveman stretch their legs in a number of different, albeit
cohesive, directions. While the dreaded second album experience tends to be fraught for many
bands, in the case of Caveman it proved to be the opposite. Having ridden a fast-growing wave
of support for CoCo Beware—which, after two years of touring, ultimately culminated in a series
of big hometown NYC shows—recording a follow up proved to be a genuine good time for the
band.

“We all went up to Jimmy’s grandmother’s place in New Hampshire,” says singer Matthew
Iwanusa. “That’s where the new record kind of started. It was literally the attic of her barn, lit
up by Christmas lights. We’d all sit in this one room together and one by one we’d all go into the
bathroom and record ourselves making the most psycho noises possible. It actually felt kind of
like a weird breakthrough. We were all confident and comfortable enough with each other to try
out these experiments, which extended itself into the making of the new record…which is really
just an evolution of this vibe that we’d been cultivating for long time.”

With that, the guys holed up in Brooklyn’s Rumpus Room to start recording in earnest with Nick
Stumpf (who produced the band’s debut album) and Albert Di Fiore behind the controls. They
routinely turned out all the lights in the studio and “vibed out the space” while recording, which
makes sense given the warm, big room feeling that saturates the record. The album is a kind of
sonic microcosm—a series of emotional yet tough mini-narratives operating within the same
quixotic musical universe.

It’s fair to say that the songs on Caveman benefited from a solid year of touring on the band’s
part. “We really learned how to play together,” says keyboardist Sam Hopkins, “the shorter
songs from the first record got longer and longer when we played them live. We learned how
to stretch ourselves in different ways.” As a result, the guitars on Caveman are bigger and more
expansive, the rhythm section is tighter and more adventurous, the keyboards more opaque
and pronounced. Like a marriage between Tangerine Dream, late period Slowdive, and Lindsey
Buckingham, tracks like their new single “In the City” and “Ankles” boast synth lines that sound
simultaneously retro and futuristic, while “Pricey” and “Never Want to Know” overflow with
guitar sounds that could have miraculously floated off an old Cure album. (It should be noted

that James Carbonetti, the band’s primary guitar player, also happens to be one of the most
highly regarded guitar makers in New York City.) And while Caveman’s music could certainly
operate on the level of dreamy soundscape and still be excellent, the depth of feeling in front
man Matthew Iwanusa’s lyrics helps weave the songs deeply into your memory. As is the case
with many a band on the rise, the price of popularity often comes at the surprise expense of
everyone’s own personal life; a topic that fuels many of the record’s best tracks. When Iwanusa
sings Where’s the time to waste on someone else’s life? on “Where’s the Time” it’s hard not to
read between the lines. Wonder and regret seem to fuel the record in almost equal measure.

“We all got so close since the making of the last record,” explains Carbonetti, “Eventually it
was like all of our lives were kind of blending together and several of us found ourselves going
through the same kinds of struggles in our personal lives. We also realized that we all kind of
loved each other—that we’d passed the friend test—and that we all just wanted to hang out
together all the time, basically. All of those feelings eventually bled into the record we ended up
making.”

The words “dreamy” and “cinematic” and “vibe” might be some of the most lazily overused
descriptors in the music-writers lexicon, but it’s hard to think of another contemporary band
that so completely embraces those terms as both an adjective for what they do and as a goal
for the art they are trying to make. “A lot people don’t relate to the idea of cinematic music—
something that sounds like a film soundtrack—but I love that notion,” says Iwanusa. “I love
music that conjures a mood, sets a tone, and inspires a certain kind of visual. I hope people can
get that from this record: a sound that accompanies this big ship flying through the trees, this
big, crazy light that just fills up the sky.”