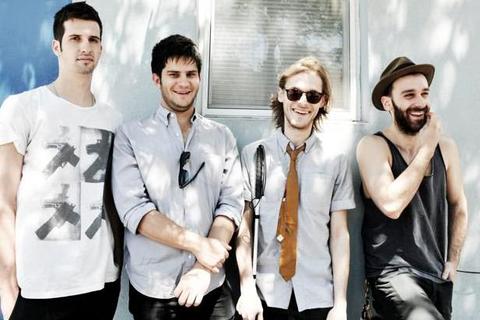 Brooklyn’s Ambassadors have become something to talk about in Norfolk, VA thanks to Norfolk’s 96x, who championed the band’s debut single “Litost”
early on. The station ranked the song #1 in 2012, beating out the likes of fun. and Of Monsters and Men, and their excitement and support spread with 94.9 The Point coming on board as well. In addition to the early on air support, 96x presented Ambassadors first headline show in the market, helping the band to sell out the 1500 capacity room The NorVa. Following the show, the band heads out on a series of US tour dates that will route them down to this year’s SXSW.

Ambassadors – Sam Harris (vocals, guitar), Casey Harris (keyboard), Noah Feldshuh (guitar), Adam Levin (drums) – started playing music together in college, but it wasn’t until 2010 that they decided to commit themselves full-time. Over the next couple of years this young band of close knit friends and brothers would craft together their debut album Litost, a record filled with both darkness and hope, songs that are groove based like “Unconsolable” (whose official music video features Girls star Zosia Mamet) and some that are truly anthemic “Bodybag.” It is a phenomenal genre bending rock album, influenced by everyone from the Stooges and Phil Spector, to George Harrison and Ginuwine.

Now with a breakout story in Norfolk, VA thanks to 96x and 94.9 The Point, Ambassadors have begun to find love in other cities across the country. The up and coming Brooklyn band will continue to tour in support of their debut album Litost throughout the Spring. For the most up-to-date information please check: http:// ambassadorstheband.tumblr.com and confirmed dates below.