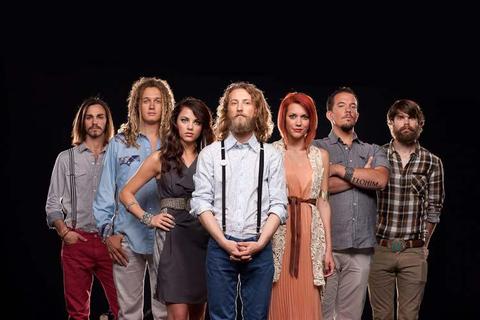 Listen to Woe Is Me

The Mississippi septet Rosco Bandana are the product of teenage rebellion and its consequences; of lost love, false starts and, above all, lasting friendship. They're what happens when a group of kids take a chance on a long shot and – against all odds – it pays off. There's also a Blur cover thrown in for good measure.

The group began – spiritually, if not specifically – when principle songwriter Jason Sanford, at that time acting in open and active defiance to his strict Christian upbringing, wandered into a tobacco store in a Gulfport mall to buy smokes and struck up a conversation with the kid working behind the counter. "He was like this real cool, hip, indie sorta character," Sanford explains, "and he ended up turning me on to people like Elliott Smith, Bright Eyes, Iron and Wine, Neutral Milk Hotel. That's kind of how it all started." His parents were wary of encouraging their son's budding interest. "They wanted to keep me in this tiny bubble," Sanford explains.

Sanford would stay up late at night, teaching himself how to play the guitar his father had given him. He certainly had plenty to write about. Just a few months earlier, Sanford's relationship with Emily Sholes had come to an end, and the heartbreak of that separation powered most of his early songs. At the same time, a childhood friend of Sanford's, Barry Pribyl Jr., had just moved back to Mississippi from Michigan, and his mother suggested he get in touch with his old friend soon after their return.

"At the time, I was into metal," Pribyl says. "So I went to this open mic night, and Jason was playing this honky-tonk stuff. I remember thinking, 'What the hell is this?'"

But the best friendships are built on compromise and the more Pribyl and Sanford started playing together, the more a specific sound started to emerge – one that blended a ragged bar-rock attitude of bands like Uncle Tupelo with a few mild nods toward the iconoclastic end of contemporary country, like Jamey Johnson. Their core in place, Pribyl and Sanford soon began looking to expand their lineup. "Jason started an open mic night at a wine bar," Pribyl said. "From there, we'd invite 10 or 15 people to come with us out to this abandoned house and we'd just jam. We sort of hand-picked the band from there." In the kind of romantic twist all great rock stories require, one of them was Jason's old flame Emily Sholes. Another was Jennifer Flint, whose fiery vocals serve as a scorching counterbalance to Sanford's down-home croon. "I first met Jason in 2006," says Flint. "He was in one of his first bands, and I honestly just fell in love with the way he wrote." Local attention inspired the band to enroll in a Battle of the Bands contest sponsored by Hard Rock, which they handily won, and they soon flew out to Los Angeles to work on their debut with acclaimed producer Greg Collins (U2, Red Hot Chili Peppers, No Doubt) at The Nook Studio.

The results are spellbinding. They turn Blur's "Tender" into a rousing, gospel-informed hymn, and work similar magic on their own compositions: "Time to Begin," the first song Sanford, Pribyl and Flint wrote together, hip-swivels like something off Exile on Main Street; the trembling, minor-key vocal melody of "El Luna" recalls both Elliott Smith and Abbey Road-era Beatles and "Woe is Me" is a rollicking country stomp in the vein of Steve Earle. "I was trying to write a real Depression Era-style country song," Sanford explains, "and so I tried to put myself in the mindset of what people back then were going through." Though it began as an attempt to channel the loose rootsiness of Old Crow Medicine Show, the result is a barnburner – a big, raucous number with a booming backbeat and deep-fried electric guitar. Whether loud and rowdy or quiet and contemplative, Rosco Bandana balance both extremes perfectly.

"It might sound cliché," Pribyl says, "but we're just these humble, good ol', down-to-earth Mississippi people. And when we play live, you can just see in our faces the joy of music."
"I want people to feel like they know us," says Flint. "I want them to feel like they can relate."

"I hope people get something honest out of our music," says Sanford. "I hope they're able to feel something, and to empathize with it when they hear the lyrics." He pauses, becoming momentarily philosophical. "You know, life and death is in the power of the tongue. And I want to put out music that's going to heal people."