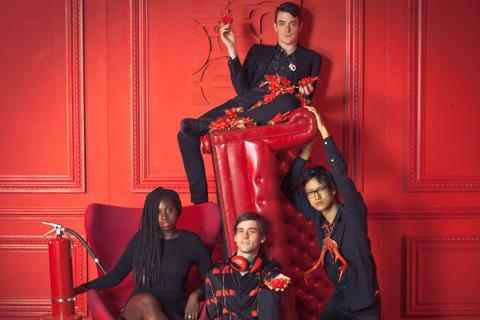 The Brooklyn based electro-dance quartet, Body Language will be kicking off the new year in true Body Language fashion. Fresh off the success of last year’s Social Studies LP—which earned the approval of everyone from NPR to The New York Times to The Guardian, who compared the breakout release to early Madonna, the indie disco of Prelude Records and “CSS doing an impression of Dr. Buzzard’s Original Savannah Band”— the band is ready to roll out the release of their sophomore album "Grammar". This roll out is expected to include a Free EP premiering some of the Grammar tracks including a remix by Niki & the Dove, an LP giveaway in April and a full-length disc set to drop later this year. Like Social Studies, this sophomore release embodies the band's restless pop experiments with a future-shocked blend of soul and R&B.

Or as multi-instrumentalist/producer Grant Wheeler puts it, “Our world still exists in an indie-disco bubble; we’re just pushing the limits of every genre to a point where the bubble’s about to pop.”

As evidenced in “Lose My Head”—a floor-filler that’s driven by late ‘70s funk licks and diamond-encrusted keys to the wobbly synth lines and Motown inspired chorus of "I'm a Mess", versatility and collaboration is the core of Body Language’s creative process, which often starts in the home studio Grant shares with singer/fellow producer Matt Young, only to be fleshed out even further with drummer Ian Young and singer/glockenspiel player Angelica Bess.

“Everyone has their part,” insists Matt. “In fact, certain people come to our shows to see different performers. I kinda like to think of it as a circus.”

Body Language’s outside projects make that circus even more interesting, from Ian’s live drumming for Matthew Dear and Angelica’s vocals on Sepalcure’s “Outside the Lines”, which was featured in the critically acclaimed film 'Black Swan' to Grant and Matt’s co-production/writing credits for such rising artists as Passion Pit, Machinedrum and Vacationer; a recurring collaborator Matt Young describes as “like Body Language if you stripped the R&B and soul parts out, took it down 30 BPM, and gave it a Mai Tai on the beach.”

Body Language has long proven they are more than just a synth dance band. Live they keep you on the dancefloor and word of mouth spreads fast as they are now known to sell out most NYC venues. They have played shows with Sia, Janelle Monae and most recently The Hood Internet and will be co-headlining a tour with Vacationer in February. With dates for SXSW and numerous DJ sets sprinkled in the pipeline the band is sure to turn it up in 2013.

The show at Lamberts on Thursday, March 14