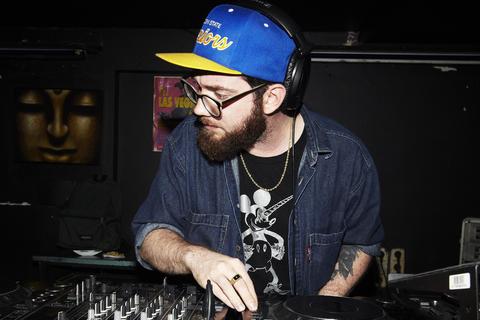 Ghosts on Tape likes raving. Mind you, not the glowstick-powered, trance-laden nonsense that masquerades as raving these days. The San Francisco resident wants the real thing: dark warehouses, big soundsystems, sweaty walls and even sweatier bodies, and the pulsing sounds of gritty house and techno.

It’s those kinds of sounds that Ghosts on Tape (a.k.a. Ryan Merry) assembles on his dual Yamaha SU700 samplers. Although the ’90s-era machines are undeniably antiquated—new sounds literally have be loaded on the fly via floppy disk—he’s thoroughly mastered these vintage weapons, crafting raw and trippy tunes that combine the ominous underbelly of classic house and techno with upfront, bass-heavy futurism. Those sonic principles also drive ICEE HOT, the influential monthly party (and newly formed record label) in San Francisco which Ghosts on Tape co-founded and where he continues to serve as a resident DJ.

A native of St. Louis, Ghosts on Tape relocated to San Francisco in 2003 and began garnering attention for his blistering DJ and live sets and the warped, slow-motion house and bass sounds he was creating. His 2009 Predator Mode EP on Wireblock exploded Ghosts on Tape’s profile even further, as did an exclusive mix for Mary Anne Hobbs’ BBC Radio 1 show, as well as compilation appearances and remixes for labels such as Planet Mu, Tigerbeat6, Frite Nite, Shockout, True Panther, Friends Of Friends, and Opit, among others. In 2011, he was selected to be a participant at the Red Bull Music Academy in Madrid. His sound has evolved over the years, gradually pushing up the tempo back towards his Midwestern house and techno roots, but one thing hasn’t changed: Ghosts on Tape likes raving.