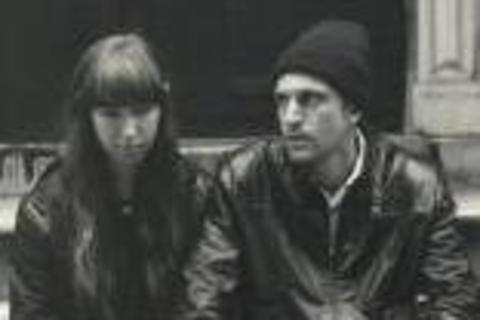 The Shivers are troubadours of rock and roll from Queens, New York featuring Keith Zarriello on guitar and vocals and Jo Schornikow on piano. Rehearsing out of a church in Flushing, their music exists in intimate spaces, speaking to the lonely heart and providing a reflective surface to the unforgiving streets of New York City. Primary songwriter and native New Yorker, Keith Zarriello started releasing music under the name The Shivers in 2001 and pens songs that could narrate a bar fight, only to later belt the ballad of the drunk at sunrise. In 2004 Zarriello released the album Charades featuring the song “Beauty”, bringing the band to the attention of the music media and future member Jo Schornikow, who joined the band shortly thereafter. In compliment, the purposeful hands of Schornikow, an Australian classically trained church organist, add flutters of beauty with her piano and keyboard counterpoint. The combination proves an authentic mixture of Lou Reed’s grit, Leonard Cohen’s lyricism and Nina Simone’s soul.

After releasing four records in six years and aggressively touring the US and UK, The Shivers traveled all the way to Manchester, England in the spring of 2010 in order to capture their latest album, “More” in a five day span at an all analog studio, devoid of computers and digital technology. During the sessions, the band used the guitar amp of Martin Hannett and embraced the warm fog and musical history of Manchester. Mixing the album in LA this past fall with famed indie producer Adam Lasus (Yo La Tengo, Clap Your Hands Say Yeah, Helium) The Shivers plan to continue their determined work ethic and tour throughout the US. Their strongest work yet, the album “More” will be released on their newfound home, Silence Breaks on May 10th, 2011.

Amongst others, The Shivers have shared bills with:
Deer Tick , M. Ward, Architecture in Helsinki, Xiu Xiu, Peter and the Wolf and Thao Nguyen & the Get Down Stay Down