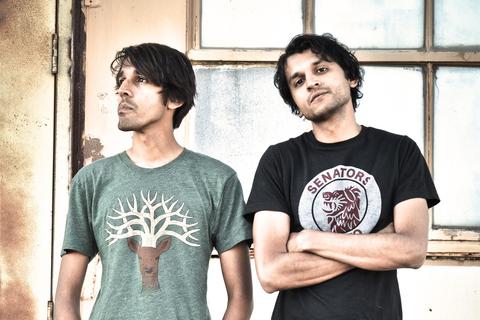 Listen to Analog or Digital

Wildlife Control is a band. They record albums and play shows. They are brothers Neil and Sumul Shah, who grew up making music and shooting hoops in the rolling hills and industrial decay of rural northeast Pennsylvania, where the first day of deer hunting season was a school holiday but Martin Luther King, Jr. Day was not.

With a name inspired by a ’68 Cadillac ambulance art car sometimes seen patrolling the streets of Brooklyn, Wildlife Control is more than just a band. When they released their first single, “Analog or Digital” in December 2011, they also launched a new kind of interactive music video (http://analogordigital.wildlifectrl.com) that uses the latest web standards to blur the lines between music, technology, and community. This was not their record label’s idea (they don’t have one).

The bicoastal brothers collaborate on everything: songwriting, production, tech, artwork, and the millions of other things that go on behind the scenes. In February 2012, they spent an entire day—sunrise to sunset—on Ocean Beach in San Francisco filming a music video in a single continuous take. With a very limited budget, they produced, directed, and released the video on YouTube (http://youtu.be/boGyFAYomBo). It went viral.

Wildlife Control released their self-titled debut album on July 31, 2012. It was recorded in studios and stairwells and parks and bedrooms in and around Brooklyn and San Francisco. The record captures performances by the band and an ensemble of close friends along with sampled and synthesized sounds in an alchemical mixture that is best summarized by the final words of their first single: it doesnʼt matter if sheʼs analog or digital.