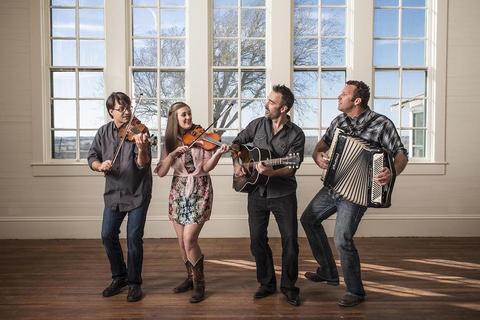 The Lost and Nameless Orchestra is a prime example of evolution in progress. With roots in traditional music paired with an emphasis on original songwriting, this four-piece ensemble has grown from its origins in fiddle-driven folk rock to a unique sound that incorporates elements of Americana, Celtic, Indie and Folk Rock.
Chris, an Arkansas State Fiddle Champion, and Patrick, a songwriter and singer, founded the Lost and Nameless Orchestra when they met in St. Louis. As their unique sound developed, Chris and Patrick moved to Austin, where they added classically trained pianist Nathan Quiring and multi-instrumentalist Kimberly Zielnicki, a 16-year-old prodigy. The sound of Lost and Nameless Orchestra is an eclectic mix, drawing on the rich and disparate musical experiences of its members.

Crossing genres has become second nature to the band’s youngest member, Kimberly. Kimberly’s musical evolution began at the age of nine when she started studying fiddle with Chris. In 2011, the band invited her to join the Lost and Nameless Orchestra. Under the tutelage of Chris, Patrick and Nathan, Kimberly began to sing and play bass and piano. When Chris added words to Irish tunes like “Red Haired Boy,” Kimberly was inspired to add her own original lyrics to the traditional folk melody “Dark Eyes.” This exploration led her to compose “Aiden’s Lullaby,” written for her young nephew and premiered at 2012’s Old Settler’s Festival, where she also won the Old Settler’s Youth Competition, joining the likes of musicians such as Sarah Jarosz and Emily Elbert. Kimberly continues to develop her musical voice, studying with Austin fiddle great Elana James (Hot Club of Cowtown), Mady Kaye for voice lessons and attending the internationally renowned Mark O’Connor Fiddle Camps.

With shows from New York to Chicago to Portland, the Lost and Nameless Orchestra is developing a national following, while continuing to grow their audiences in legendary Texas venues such as Antone’s, The Continental Club and McGonigel’s Mucky Duck. They recently shared the stage with the legendary David Bromberg and Celtic-rock band Gaelic Storm. With showcases at SXSW, Folk Alliance International, Kerrville Wine & Music Festival, and representing Texas on Tour in Minnesota and Ohio, the Lost and Nameless Orchestra are exploding onto the national music scene.