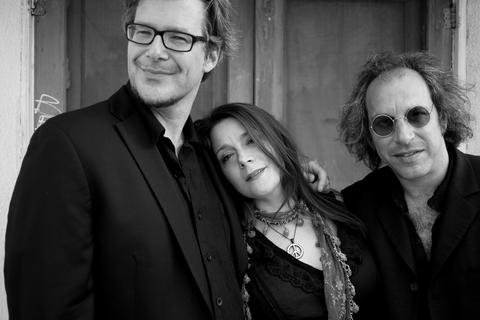 Listen to Victory of Flying

Carolyn Wonderland has never forgotten where she came from. On her new album Peace Meal (Bismeaux), she brings the hard-won lessons of her own blessed life together with stories from some of the world’s best-known and most beloved songwriters (Bob Dylan, Janis Joplin, Robert Hunter, Elmore James, and Robert Johnson) to create a musical menu of sustaining, satisfying songs that offers musical food for thought to her growing legions of fans.

Internationally heralded as one of the best vocalists in her adopted hometown of Austin (which is saying something!), Wonderland has also been highly touted as a guitar goddess and is quickly making a name for herself in her highly competitive neighborhood and far beyond.

What makes Wonderland’s story so compelling, however, is the string of obstacles she had to overcome to get where she is today.

“When you're happy, you dance. When things get under your skin, find a pen.” -Carolyn Wonderland

Often mentioned in the same sentences as Texas legends Janis Joplin and Steve Ray Vaughan (references that leave the modest Wonderland “floored, humbled and thrilled”), Wonderland also shares with these lost legends the legacy of a bumpy road to fame. Growing up in Houston, the young Wonderland put aside her dolls in favor of a guitar and spent hours each day doing what her heart hungered for. Wonderland desperately wanted to make it in music, but found it difficult in Texas’ overstuffed scene. Taking such Houston influences as Little Screamin’ Kenny (who she cites as one of her favorite songwriters) and Doug Sahm with her, Wonderland headed to Austin, the heart of the American music world, and soon found herself flat broke and literally living in a van by the river.

After months of scratching and clawing and taking any gig she could, Wonderland began to rise above the thick twangy crowd and make a name for herself. Playing solo and with her group the Imperial Monkeys, Wonderland soon found herself in ever-better company, playing alongside and for the likes of Los Lobos, Robert Earl Keen, Ray Wylie Hubbard, Buddy Guy, Johnny Winter, Ray Benson (Asleep at the Wheel) and Bob Dylan. Hit albums began to roll off her fingers and Wonderland was invited to appear on such television shows as Austin City Limits, Time of Your Life and Homicide.

“Come on in, the water's fine. If it gets too deep, I'll throw you a line.”
- Carolyn Wonderland, “Usurper”

Recently married to famed funnyman A. Whitney Brown, Wonderland’s life has taken a number of turns for the better. Even so, Peace Meal ponders the darker issues of life. The opening track (“What Good Can Drinkin’ Do”) is a rarely heard Joplin composition. One would think that Carolyn might have been tempted to cover Janis earlier, considering the many comparisons she has politely deflected throughout her career. But as Carolyn reasons, “Growing up in Texas, young girls learn to only sing Janis’ songs in private.” It wasn’t until the Rock-n-Roll Hall of Fame asked her to perform in a Joplin tribute event in 2009 that Carolyn got comfortable with the idea.

Having seen what loneliness and war can do to the bodies and souls of her fellow men and women, Wonderland is a tireless advocate for the homeless and for peace. Peace Meal is her latest testimony to their struggle and her latest call of action and hope. Newly penned tracks dazzle, such as “Victory of Flying” and “St. Marks”, the latter of which Carolyn calls “my first honest Love (with a capital ”L”) song.” Carolyn dug up another gem, “Golden Stairs” from Vince Welnick and Robert Hunter (Carolyn and Vince were both in Jerry Lightfoot’s band in Houston for a time), and with the help of Larry Campbell on pedal steel, unleashes an epic vocal performance. Additional highlights include Dylan’s “Meet Me in the Morning,” the Robert Johnson / Elmore James classic “Dust My Broom” (produced by Michael Nesmith), and a pair of tracks performed in tribute to Little Screamin’ Kenny “I Can Tell” and “Two Trains.”

Her previous album, 2008’s Miss Understood (Bismeaux), and the tireless touring that accompanied it brought Wonderland into the ears, minds, and hearts of millions. From appearances on PBS’s ACL to top slots at major festivals around the world (including Amsterdam’s Wonder Jam, which she humbly takes credit for inspiring), Wonderland spent every ounce of energy in her towering 5’4” frame to bring her music and spirit to the masses. The album quickly reached the Top 10 on Billboard’s Blues chart and Wonderland’s live shows left a trail of screaming fans in its wake.

“That lick! You know the one... From Elmore James to Hound Dog Taylor and everyone thereafter, everyone hits the same notes, yet nobody plays it the same.” -Carolyn Wonderland on the track “Dust My Broom”

From classic Blues licks to gospel crooning and her famous whistling to peace anthems, Wonderland gathers all her friends and inspirations and pulls out all the stops to give music fans all they can handle. For those who hunger for good music, Peace Meal is just what you need!