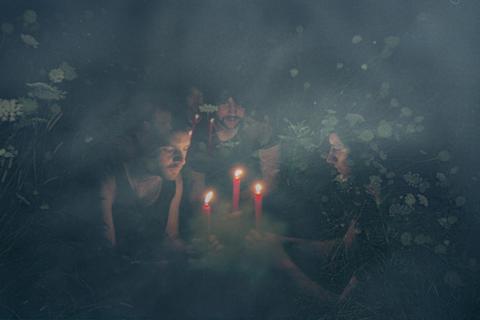 Rituals is the Toronto based incarnation of art school graduate Adam Christopher Seward. After spending the summer of 2009 writing and recording in his bedroom, Adam decided to pass them around to friends. Shortly after, The hazy, cinematic post-punk songs reminiscent of the 80s post punk and no wave as well as 90s shoegaze psychedelia, became a live band. He brought Matt Bourassa (Sailboats are White) whose sludge punk chords helped bring the band international attention as well as Polaris prize winning producer Leon Taheny, (Dusted, Germans).

Stemming from a diverse group of musical backgrounds, the trio began playing live together in June 2010 and quickly became a Toronto buzz band, ‘the three-piece cranked out slab after slab of upbeat, distortion-blasted epics,’ Exclaim magazine. Having played countless shows in Toronto and Canada they have developed a good resume of bands who they have shared the stage with including, METZ, A Place To Bury Strangers, Moon Duo, Woods, No Joy, Mac Demarco, Dusted, and many others.

Their debut 7’ was released on Unfamiliar Records in nov 2011. In a short time the debut EP reached many indie blogs across the world including Passion Party, No Pain in Pop, Grrrizzly and many others. Currently they are crafting their much anticipated followup EP expecting to release in early 2013 on Mike Haliechuk (Fucked up) and Carey Kurtins’ (Belham Music Management/Dine Alone) partnership label One Big Silence, The label considered home for Diamond Rings debut EP, Austra’s debut EP, Trust and Moon King.