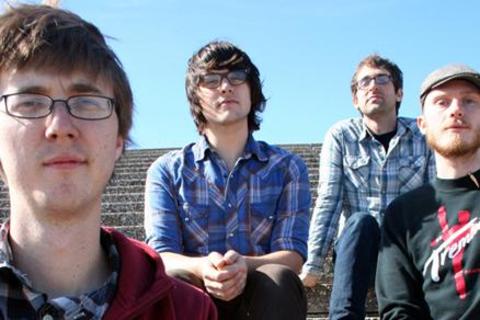 Patience. There’s a pregnant pause at the beginning of So Many Dynamos’ video for “Matter of Fact”, a new song from their much-anticipated LP set to be recorded this August, that may seem unsettling for fans of the St. Louis-based group. Patience is a virtue previously considered unnecessary to its loyal, and ever-expanding, fan-base. We’ve come to anticipate the waves of sound to unfurl fast, fur
ious, and blissfully manic. Barbed, intertwined guitar riffs and drum assaults barrel down on you at dangerous speeds, and rarely let up for the duration... all to the ecstatic pleasure of warm, fuzzy eardrums and sweaty dance-floor workouts. And yet, now 10 years, 3 LPs, and close to 1,000 live performances removed from their inception, their sound sweetly, assuredly, patiently... builds. Each rhythm, note, and melody is meticulously calculated, plotted, and layered. We see the song constructing itself for a minute and a half until it locks into a groove... and what a groove it is. Don’t be afraid, friends: There’s too much Thriller in their blood to stay away from the floor. The closest touchstone would be New Order’s classic video for “Perfect Kiss”, wherein Jonathan Demme lingers on each individual component of the song, building in long, deliberate takes, helping you appreciate where the song is taking you, and not just how quickly it gets you there. This may seem like an oddly specific detail, but it’s a crucial one in understanding the craft, maturation, and patience So Many Dynamos have developed in their evolution as artists.

Realignment. Referring to 2009’s The Loud Wars as So Many Dynamos’ watershed moment would be a drastic understatement. They’ve lost and gained two members in the last few years, with Aaron Stovall and Clayton Kunstel welcoming Nathan Bernaix and Travis Lewis to the permanent roster. But, that lone fact merely hints at the group’s ubiquity in the intervening years. Defining itself as a pivot point of the local music culture in Saint Louis, it’s been a variegated deluge of collaborations, residencies, experiments, and refinements. For instance, whereas detailed liner notes were included in The Loud Wars to notate all the intricacies of the album’s dizzying clockwork, Dynamos have now allowed their work to breathe, contract, and expand in the presence of eager voyeurs. They’ve played host to improvisational electronic performances where a slew of artists, including the monolithic West Coast genius of Hawthorne Headhunters, assisted in stretching their palette to astral proportions. “Collaboration with other artists has become essential in finding new inspiration in how we think about writing and performing music”, Stovall explains, “It forces you to listen. It forces you to choose what's right for the song and not just for yourself. It's a great way to step outside of your own expectations and limitations as a performer. It's all about seeing how far we're able to push one another, while at the same time, furthering our individual growth.” It’s audibly apparent that no direction went unexplored in their burgeoning soundscapes, all the while developing their graduate thesis that intellectual pondering and romantic longing aren’t mutually exclusive, both sonically and lyrically.

Document. That progressive, adventurous spirit is well-documented on their eponymous EP, which is set to be released digitally on June 26th. When asked why they decided to go self-titled for this particular release, Stovall said, “We've been virtually inactive in touring and releasing music for the past couple of years. Nowadays, bands are constantly challenged with retaining relevance in a world where music is consumed faster and more efficient than ever before. And with that, this EP, for most people, will function as an introduction to So Many Dynamos and as a prologue to the next LP. In keeping with the theme of introductions, we decided a self-titled release was the most appropriate.” And, truthfully, introductions don’t get much better than this; So Many Dynamos is an addictive 3-song exercise in the discerning pleasures of drum patches and synth filters, and it constantly reveals new facets on each repeated listen. They conjure a sound that achieves the euphoric heights of being both next-level and reverential simultaneously, in the spirit of bands like the Talking Heads, New Order, and LCD Soundsystem. There’s a heady, physical amalgam of 80’s R&B, Thomas Mapfumo-style guitar musings, and the early days of Factory Records 12” dominance. Live, they’ve augmented their lineup with auxiliary members to replicate the many bells and whistles (both literally and figuratively) of the heavily percussive twist on their sound. That twist, is something which will only be expounded on in greater detail with the upcoming LP and subsequent tours.

There’s a brief line intoned ponderously in the lead track of the EP, ‘Analysis Paralysis’: “Impossible may take some time, I know”. If this is just a foregleam of the things to come, then impossible does indeed take some time. Nevertheless, this year you’ll have the document that So Many Dynamos have found it. It’s been worth the wait.