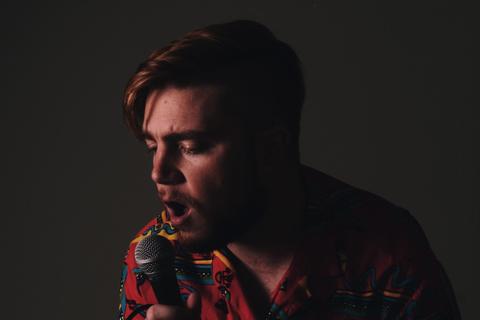 Aaron Bergunder started playing electronic music years ago under the moniker KaraokeMF to make silly remixes of his more focused rock band, Colourbook. While it began as more of a joke, as time went on KaraokeMF grew into a songwriting outlet for Bergunder, despite the material being shallow, vapid and mostly about bodily fluids.
Gradually the project evolved with a new name, more polished sound and concise aesthetic. Dreamboat began playing live shows (karaoke-esque performances to mixed down instrumentals on his iPod) where he would treat the crowd to his specific brand of sweaty, strange performances. He released the Fun Fools EP in 2009, whetting appetites with promise of an LP on the horizon. Latching on to friend and electronic wizard Chris Long (Longshanks, Monolithium), the two nitpicked for another year and a half before releasing Buddies in December 2010 to immediate praise. Dreamboat worked his way through a few pairs of fishnets touring out to Toronto with friends Techromancer in 2011 and quietly released remixes of New York’s Bikini and Portland/L.A.’s YACHT. Not one to sit on his hands long, lately Dreamboat has been revamping his live shows with sensual slow jam editions and writing a whole new batch of songs about boys and men and boys becoming men. Dreamboat will release is Sophomore LP on Hybridity Music this spring.