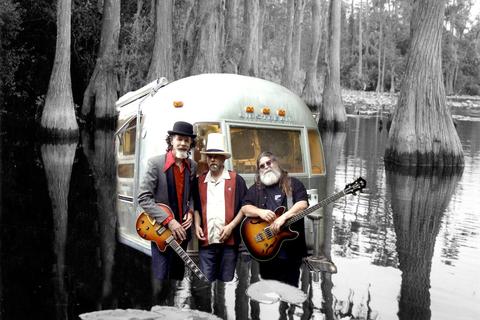 From the writers and performers of the theme song for the popular Discovery Channel reality show American Guns, Swamp Cabbage has been invited to SXSW to share their North Florida fatback boogaloo blues and trailer park funk. Humorously christened "the best band nobody's ever heard of " by fans on their recent tour of Spain, this trio is nonetheless engorged with marquee value. For 10 years, bandleader Walter Parks was sideman to Woodstock legend Richie Havens playing such rooms as Madison Square Garden and Carnegie Hall. Bassist Jim Devito records all of JJ Grey and Mofro's fine albums. Drummer Jagoda played on T Bone Burnett's recent record Tooth of Crime. If you like early ZZ Top, The Meters, Dr John, Tom Waits, Tony Joe White, Mofro and The Black Keys this is an old-school rootsadelic roadshow performed on analog vintage instruments that is not to be missed. Swamp Cabbage's song are also featured on such shows as Man vs Food and My Big Redneck Wedding.

Swamp Cabbage is currently working on the finishing touches for their newest CD of original music. They have three previous albums of original material under their belt -- Honk (2006), Squeal (ZOHO Roots, 2008) and Live From New York (2010) as well as Drum Roll Please (2012), a disc of re-envisioned, re-imagined and re-swamped 70s classics, presented in a way that only the raspy singin' combo of fatback blues and trailer park funk can dish out.