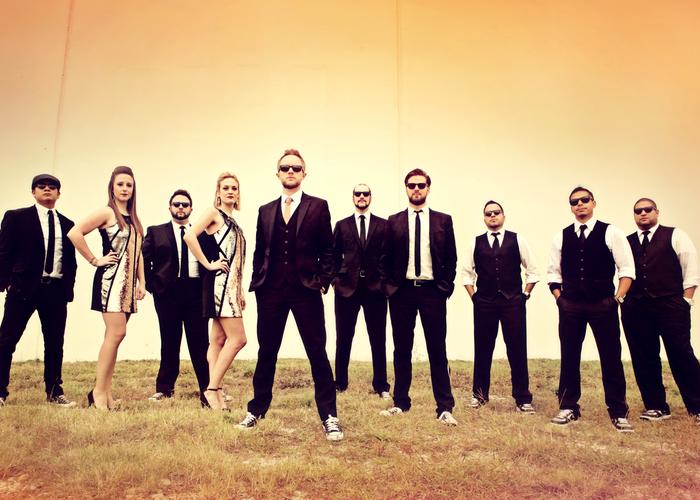 Listen to Get Up!

Located in Muscle Shoals, Alabama, FAME Studios achieved an almost mythical status in the 60's and 70's as the host of unforgettable sessions by Aretha Franklin, Wilson Pickett, The Staple Singers, Percy Sledge, Little Richard, The Allman Brothers, and countless others. It was the birthplace of the Muscle Shoals Sound and home to The Swampers, the unparalleled rhythm section that laid down the grooves for an incredible number of timeless classics and influenced a myriad more. For a southern soul band like The Nightowls, it was Mecca.

"Most of us grew up on our parent's record collections, listening to classic soul and Motown," says Ryan Harkrider, who founded The Nightowls in Austin, Texas. "The music that came out of FAME has always been familiar to us and ingrained in w...

Located in Muscle Shoals, Alabama, FAME Studios achieved an almost mythical status in the 60's and 70's as the host of unforgettable sessions by Aretha Franklin, Wilson Pickett, The Staple Singers, Percy Sledge, Little Richard, The Allman Brothers, and countless others. It was the birthplace of the Muscle Shoals Sound and home to The Swampers, the unparalleled rhythm section that laid down the grooves for an incredible number of timeless classics and influenced a myriad more. For a southern soul band like The Nightowls, it was Mecca.

"Most of us grew up on our parent's record collections, listening to classic soul and Motown," says Ryan Harkrider, who founded The Nightowls in Austin, Texas. "The music that came out of FAME has always been familiar to us and ingrained in who we are. Since day one, we called our trip to record there a pilgrimage."

The band released their debut, 'Good As Gold,' in 2014 to widespread critical acclaim. The Austin Chronicle hailed it as "suave, energetic, blue-eyed soul" and named it one of the Top 10 of the year at the annual Austin Chronicle Music Awards, Austin Monthly named them a Band To Watch, and Texas Music Magazine called the album "a smooth addictive blend of pop, R&B and funk that will delight the band's dance-happy fans." They spent the next year bringing their ecstatic live show to stages around the country, including a triumphant hometown gig at the Austin City Limits Festival, and followed it up with a four song EP ('Good As Gold B-Sides') and a vinyl re-release of the album due to popular demand. When it came time to record their sophomore LP, though, The Nightowls knew there was only one place they could go.

"We had the idea to record at FAME," Harkrider remembers, "but we were really, really worried about whether the studio would be available, or if The Swampers were still around. What were they like? Would they come out and play on our record? But it was the easiest thing in the world. I called up the studio and it was southern hospitality at its finest."

Plans were made for three days of principal tracking at FAME, and the band wrote the entire album in the three months leading up to the sessions, including on the drive from Austin to Muscle Shoals.

"We did a lot of research and a lot of listening to all the music and all the artists that came out of FAME Studios," says Harkrider. "We made a lot of intentional choices, not only sonically but also with the arrangements, to reflect that legacy. Ultimately, because it's a sound that’s been ingrained in us for so long, it felt very natural, but we crafted the album to play like a microcosm of the history of the studio, going from the early days of classic soul through the later days with a southern rock sound."

It's an ambitious project, to say the least, the results of which put The Nightowls in a musical league of their own. Joined by original Swampers David Hood and Spooner Oldham along with iconic background vocalists The Shoal Sisters, the band channels the electricity and ecstasy of the studio's golden era and blends it with an undeniably modern presence across eight soulful tracks, each captured primarily with only a handful of raw takes.

The album, due out September 1, opens with "Nobody But You," which draws on the kind of soul/Motown pop classics that put FAME on the map. It also introduces all 10 pieces of the Nightowls' ensemble, from the horns and guitar to the organ and soulful vocals, while ushering in a new Gospel texture to the band's sound that colors the whole album.

It's followed by lead single "Get Up!" which calls to mind Sam & Dave's charm and charisma.

"It's a highlight moment when the entire band is engaging and encouraging the audience to become participants in our show and not just spectators," says drummer Ben Petree. "The song is literally about getting you to join in the fun and dance with the band, and it's one of the defining moments in our show that people remember and anticipate every time they see us. I think the breakdown section of the song perfectly sums up what we want from our audience. We want them to get up on their feet and 'clap their hands, stomp their feet, move their hips and do the twist.'"

"City Love" features a rolling saxophone line that evokes a nighttime walk through the urban jungle with lyrical nods to James Carr and Jimmy Hughes, while "Don't Wanna Say Goodbye" highlights the interplay between the horn section and background vocalists, and "Sad Sad Song" features a soaring string section. "Come On Over (Come Together)" was written in the van on the way to the studio—and had never been performed prior to recording—as was "Avalon," which tells the story of the band's journey to FAME and celebrates the studio's southern rock legacy.

"The Allman Brothers formed in FAME Studio B, as Duane Allman had been working as a session player and was most known for his guitar work with Wilson Pickett," explains guitarist Amos Traystman. "And The Swampers were not only the house band for many of the greatest soul songs ever written, but they also went on to help pioneer southern rock and record some legendary classic rock albums when they later left FAME to open Muscle Shoals Sound Studios. We wrote 'Avalon' to be anchored in soul," Traystman continues, "but also layered in those southern rock overtones. The title takes its name from FAME's address (603 East Avalon Avenue, Muscle Shoals, AL), while also alluding to a mythical location where magic happens regularly."

The song features legendary Muscle Shoals session guitarist Will McFarlane, who also contributed to "Highline," a sonic departure from the rest of the record that's stripped down without horns and background vocals, as Harkrider fervently sings, "I’ll be your last call when your lifelines slip away."

"For the first time, we strayed from our normal band lineup and relied on the rhythm section and the lead vocals to carry the track," says bassist Rob Alton. "Our goal was to create a stripped-down, earthy texture with the rhythm section that would match the song's brooding lyrics and Ryan's passionate vocal performance. The sweeping slide guitar adds another unique element to support the somber tone."

It's a poignant moment, an intimate invitation that draws you deeper into the world of The Nightowls, and it's precisely the kind of unexpected magic that FAME has always fostered. By approaching the studio with such a deep, innate understanding of its history, the band was able to tap into the spirits of the soul greats that walked those floors before them, and at the same time, create their own entry into the room's storied legacy. With the best album of their career under their belts, a return invite to Austin City Limits planned as part of their fall 2015 US tour, and an exhilarating live show that blends sharp fashion and fiery performances, there's no doubt The Nightowls have a whole lot of fame in their future.

The show at Maggie Mae’s Gibson Room on Tuesday, March 15