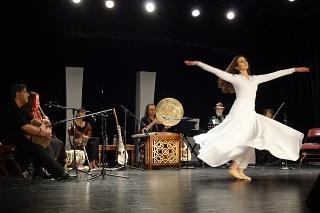 1001 Nights Orchestra is Austin's longest running Middle Eastern ensemble. The group was founded by Kamran Hooshmand in the early nineties to present Austinites with music and cultures of the Middle East. The group's repertoire includes songs from a vast area from Southwest Asia and the Caucuses to the shores of the Mediterranean and the Balkans. Each of the band members bring years of experience and specialty in the music of these regions on the clarinet, violin, bass, oud, santur, percussion and many other instruments. Their recently-released, dance-oriented live recording "Live from Austin, Texas: Music from the Middle East, Southwest Asia and the Balkans" is available online. For this concert, the ensemble arranges their repertoire in what they call a "beats class" whereby they play one song (mostly instrumental) from the Middle East/Balkan region for a selection of musical beat cycles from 2 to 18.

The show at Russian House on Wednesday, March 18