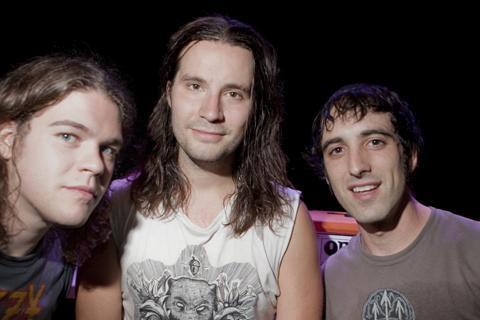 The high-water marks within the canon of heavy music can typically be both rapidly acknowledged and recognized by album names alone. Jane Doe, Until Your Heart Stops, Jupiter… Quite often, because of how impacting and paradigm-shifting the first listens are, fans of said albums can vividly recall the whens and wheres of the first time they encountered or purchased these works.

Two of the creative minds behind the three classics cited above are Stephen Brodsky (CAVE IN) and Ben Koller (CONVERGE). Having done numerous tours together during their lengthy tenures in both bands and having forged a connection spanning over a decade, it stood to reason that, when the two individually relocated to their current home of Brooklyn, NY, eventual collaboration could emerge.

In fact, “collaboration” might be a bit of an understatement here, as it sometimes implies something almost whimsical or done as a favor from one party to another. If Helium Head is any indication, MUTOID MAN is far more than just a couple of established musicians doing some temporal weekend jamming. From the opening notes of album starter “Gnarcissist,” it’s hair-raisingly clear that Brodsky and Koller have fully-immersed themselves in yet another true gem and have served notice to fans and peers that the originators of a very specific brand of heavy music oft imitated, yet never quite mastered elsewhere, still hold firm dominion over the sonic landscape they carved out themselves many moons ago.

The show at Quantum Lounge on Thursday, March 13