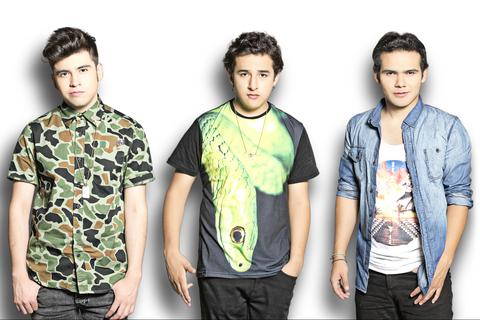 Forcing hard drives and making turntables tremble, 3BALLMTY (pronounced: Tribal Monterrey) hails from the rocky mountains of the Northern Sultana, a group that with its incomparable "tribal guarachero" style revolutionized the Latin music scene and conquered stage after stage in Mexico, the United States and Europe.

Wandering through the flea markets of the city of Monterrey, Toy Hernández, renown producer and taste-maker better known as Toy Selectah, was discovering and collecting albums when he came across these young DJs/producers. Due to the unique sound of their mixes and productions, he decides to meet them. Because of a natural empathy and almost cosmic connection with the boys, he decides to back them up and become their music guru and producer starting at the end of 2009.

Currently considered one Mexico's most successful musical phenomena of recent times, internationally award-winning, top-selling recording artists and the reigning kings of social media, the members of 3BALLMTY have broken down cultural barriers, paradigms and genres. In a short time, the group has become the most important exponent and genuine representative of the "Tribal generation". Their electronic mixes can play at a birthday party or quinceñera in their native city, as well as at some underground venue in Germany, USA or Portugal.

3BALLMTY is comprised of Erick Rincon, DJ Otto and Sheeqo Beat, who, despite being young (between 20 and 22 years of age), succeeded in appropriating the most demanding ears, as well as gaining credibility among renowned international media specialized in dance and/or alternative music, such as the British newspaper The Guardian, The Fader, Vice, Billboard magazine, Rolling Stone and the New York Times.

The cultural phenomenon that 3BALLMTY has generated with their electronic blends of pre-Colombian, African music and purely tropical Cumbia textures has been so strong that artists such as Shakira, Paulina Rubio and Daddy Yankee have asked them to remix their songs.

With the release of "Quiero Bailar (All Through the Night)" featuring Becky G and "La Noche es Tuya" featuring America Sierra and Gerardo Ortiz they give us a taste of their highly anticipated sophomore release, "Globall."