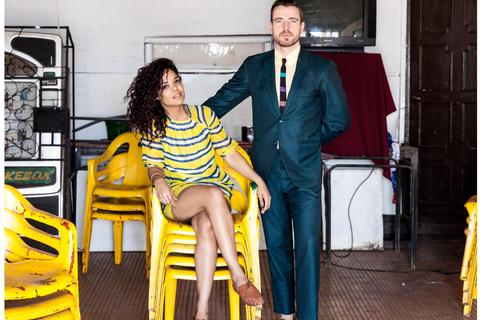 Jesse Nolan describes the name of his band ‘Caught A Ghost’ as referring to the sensation of being filled with the spirit of the past. “It’s an old expression,” he says, “musicians used to say you caught a ghost if you gave a good performance. Like you were possessed.”

As the songwriter, producer and lead singer of the band, Nolan is a devotee of music from bygone eras. But he eagerly expounds upon his affection for vintage soul, delta blues, and 90s rap alike. As Nolan explains, “It’s definitely like being possessed. It’s an obsession. What’s not to be obsessed about? I don’t think it makes me unique, it makes me human.”

What does make Nolan unique is his musical dexterity (he plays all of the instruments on his recordings except horns and some of the drums) combined with the effortlessness with which he seems to pull from many different genres. His music recalls influences from the soul and rock n’ roll traditions (Stax, Motown, Sam Cooke, the Rolling Stones) yet still feel distinctly modern with references to hip-hop and electronic recordings from the 90s to contemporary tracks. The diversity of influences in Caught a Ghost that spawned from Jesse Nolan’s mad scientist approach to composition has sparked several comparisons to another Los Angeles native, Beck.

“I had a very rich musical upbringing.” Nolan says. “My dad, who is a musician himself, exposed me to a lot of great music. He’s a stax/Motown fanatic, and obsessed with seeing live concerts. I also grew up in the 90’s watching MTV and listening to rap, so I’m into tracks that hit hard.”

The result: Caught a Ghost produces a sound and aesthetic that separates them from the rest of their neo-soul contemporaries. Of course there are threads of classic influence that are apparent, but, for example, the hypnotic synth line on “Time Go” as well as the use of dubstep wobble bass with a full Motown horn section on “Sleeping at Night,” quickly sets the band apart from others that have tried to directly revive the Motown sound.

Every song feels on some level like a great remix. “I love the aesthetic of taking something old and repurposing it.” Nolan says. “But another difference with my music is that I don’t tend to use samples- I’m just sampling my musical memory. It’s a very imprecise process really, like a Jackson Pollock painting. I’m just splashing sounds around. I’m an imperfectionist.”

“Caught a Ghost is ultimately about a collective experience.” Nolan says. “It may have genesis in my weird brain, but it’s ultimately about creating community.” That spirit is reflected in the makeup of the band, which includes Stephen Edelstein on drums, who was Jesse’s kindergarten classmate.

Anyone who has seen Caught a Ghost play live can also testify to that notion. In addition to playing high energy shows with as many as nine musicians and various dancers onstage, the group often makes use of projections and performance art as a means of shaking people out of their comfort zones.

Part of that approach comes from Nolan’s desire to stay active. He describes his last label experience as a disaster. Early on in his career, Nolan found himself in another band that was signed to a relatively big record contract that ultimately fell apart just before the release of the first record, ending in the dissolution of that band. The experience left him with the desire to completely re-imagine his approach to music. “I was crushed,” He says. “But like anything else, often the best work comes from the darkest turmoil. For me, Caught a Ghost was truly a self-reinvention, on a musical, personal and spiritual level.

Caught a Ghost has signed to +1 Records (The Heavy, The Morning Benders, The Postelles), and their debut EP “Nightworks” will be released on February 12th, 2013. When asked about the title, Nolan says wryly, “I stay up late. It’s what Franz Kafka said about writing- that it was nightwork. The night offers peacefulness and the opportunity to go deep into your own head.”

With their debut EP forthcoming, and their full-length album to follow soon thereafter, try and catch this ghost while you can.