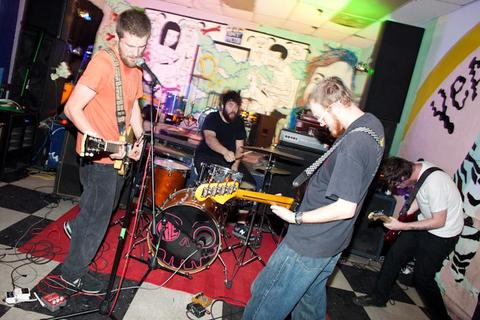 Pile have been dropping jaws in the Boston underground since their inception, earning themselves a legendary status throughout the years. After touring the country in support of their much-lauded 2012 release, Dripping, they gained national notoriety, often being recognized as your favorite band’s favorite band, and with good reason. Just when you think Pile couldn’t possibly top their last release, they switch things up and amaze once again, this time courtesy of “Special Snowflakes,” the a-side to their upcoming single. Teaming up with production duo Dan Angel and James Ryskalchick (Fat History Month, Speedy Ortiz, Ugh God) at Philadelphia’s The Sex Dungeon, the same studio where they recorded Dripping, Pile have returned with their most ambitious material to date. Rick Maguire (vox/guitar), Matt Becker (guitar), Matt Connery (bass), and Kris Kuss (drums) are dedicated to challenging themselves and their audience, offering the unexpected with every new release. “Special Snowflakes b/w “Mama’s Lipstick” will be released March 11th, 2014 via Exploding in Sound Records.

Their most sprawling offering yet, “Special Snowflakes” is complex yet meticulous like a spider web, easy to get caught within the tangled riffs and interlacing rhythms. Maguire explains the meaning behind the song derives from "the trouble with putting any stock in the opinions of strangers." You can hear and feel the weight of this perplexity as they build tension in their performance like no other band can. The track invites you to truly experience each dynamic change as it transitions between mesmerizing indie rock and bulldozing post-punk, a visceral attack of squealing guitars, disjointed rhythms, and brilliantly unexpected shifts.

The building tension and its seething release have already made “Special Snowflakes” a staple in recent months during Pile’s chaotic live shows. The band has been known to take control over a room, with audiences split between mesmerized and riotous. By the end of the set though, everyone knows they’ve witnessed something special. Having toured heavily for the past several years, Pile developed a strong and loyal fan base throughout the basements and DIY venues of the country.

PILE will be touring this Spring with Speedy Ortiz, Big Ups, and Fax Holiday, including a stop at this year’s SXSW and Savannah Stop Over. If you are interested in having the band play your showcase/party, please get in touch. Tour dates are below, with much more information to come.