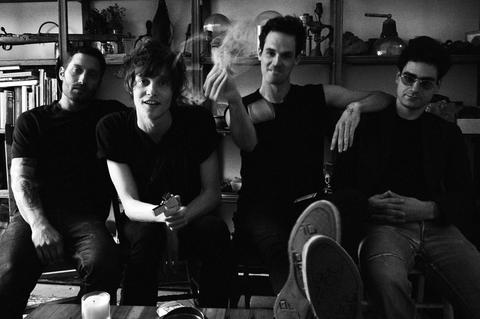 In the late summer of 2011, Drowners frontman Matthew Hitt found himself in New York City. He’s from a small town in rural Wales but New York is where Hitt feels most at home. “I just like the way things look here. I like the way things are done here. I like how late everything happens,” he says. New York’s signature up-all-night energy courses through Drowners’ self-titled debut, but there’s a sweet melancholy to the album as well.

In his down time, Hitt began writing songs that reflected this renewed interest in angular, compressed rock and roll. “The early songs came out really short – I thought, well, I’ve already sung the chorus twice I don’t need to do it again, that’s what makes it a chorus! I think that being in New York influenced what I was trying to do with economy in song structure and instrumentation. It’s like, here’s what I’m trying to say. Okay, I said it. Now it’s over. Onto the next one.” Gallivanting around downtown, Hitt also met likeminded souls, including future bandmates, Jack Ridley III (guitar, vocals,) Erik Lee Snyder (bass,) and Lakis E. Pavlou (drums).

It would take the better part of the next six months to secure the right record deal, but during that time the band gigged like crazy, ratcheting up their live prowess. They also released a well-received EP, Between Us Girls. By the time Drowners were in a recording studio to record their full-length debut, with producers Gus Oberg and Johnny T., they were ready. The first single off Drowners’ eponymous debut, “Luv, Hold Me Down,” is a propulsive slice of perfect garage pop. “It brings across this sort of jovial misery,” says Hitt, “It’s kind of pop, like a lot of the rest of the record, but lyrically, it’s not as shiny as seems.”

The other side of coin, according to Hitt, comes courtesy of the melodic and melancholy track “A Button on Your Blouse” which changes up the pace of Drowners’ self-professed brand of romantic aggression. “I always think of this one as our ballad even though it’s not even that slow,” says Hitt with a laugh. But it’s the cheeky grime of “Long Hair” that really showcases the easy, dirty thrill of Drowners.

While Hitt is responsible for the elegantly understated lyrics throughout the album – the kind that adhere to his Salinger-esque economy of words – he professes that everything changed as soon as recording began. When Hitt, Ridley, Snyder, and Pavlou began to play, Hitt’s initial blueprint and the band’s extensive punk music background melded, giving the album its true form. The group wanted to present something slightly different, says Hitt. “Our live shows are a lot more aggressive,” he adds, “With the album, we wanted to create like a sort of layered, fleshed out live show.”

The result is an album that’s equal parts playfulness and disquietude, toeing the line between music that sweeps the listener up, and lyrics that beg for their deep sensitivity and understanding. “Whether you think something is good or not is if you respond to it,” says Hitt. “I wanted to illicit a response, but I want them to get whatever they want from it.”