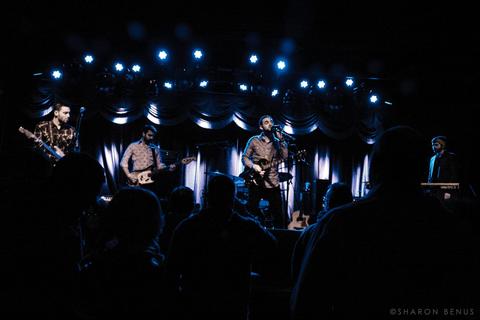 Modern Inventors have devised their own unique musical niche in a staggeringly short amount of time, but Matt Kass and Josh Benus are not in the business of cheap thrills. The Philadelphia-based outfit, craft songs as if they were pieces of abstract art that patiently blossom into view; carefully rendered arrangements, heartbreaking harmonies and dense turns of phrases slowly creep up into the foreground upon repeated listens.

“Our aim was to create something that was viable and tangible at a large level, while still maintaining artistic integrity,” explains Benus, Although it took years for Kass and Benus to find each other, Modern Inventors’ ascent has been rapid. Shortly after playing their first show together, Modern Inventors quickly found support from Philadelphia’s WXPN-FM, the radio station then asked the band to record a Paul McCartney cover in honor of the music legend’s 70th birthday, and after the group’s take on “Every Night” became popular on WXPN, the version eventually made it to the former Beatle himself, who tipped his cap at the tribute in an email to the group. “He said he was ‘chuffed,’ which is a British phrase meaning ‘moved,” says Kass.

Matt Kass and Josh Benus met on tour in 2007, in Connecticut as longtime musicians and members of two different bands, and a mutual admiration led to their first collaboration — Kass producing Benus’ first solo album — two years later. Soon, the duo’s chemistry was recognized and a band dynamic formed, with the addition of Joel Gleiser on Keyboards.