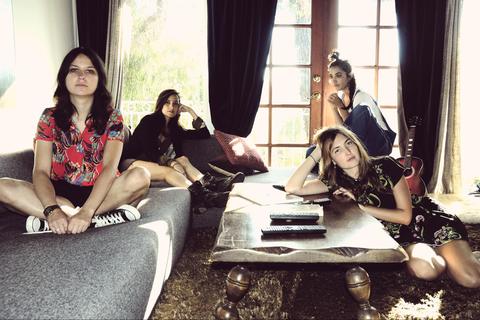 The most important element of Warpaint’s second, self-titled album is space. The hauntingly lovely sounds that comprise its 12 songs are punctuated by a distinct absence of sound, one that elevates the band’s music to a new place of depth and emotional poignancy. For the Los Angeles rock band crafting a second album offered an opportunity to expand the ethereal, hypnotic songs on their 2010 debut The Fool and to mirror their extensive live experience on a recording while allowing for the inclusion of more room.

The group, formed in 2004 by Kokal, Wayman and Lindberg, toured on The Fool for two and half years, solidifying the bond between the musicians over the course of numerous performances around the world. The new album represents Mozgawa’s first full collaboration with Warpaint since she jointed shortly before the band recorded The Fool in late 2009, something that augmented the experience this time for everyone involved. The initial work on Warpaint began at a house in Joshua Tree in March of 2012, where the four musicians decamped to write and demo early ideas for the new songs. There was no immediate vision or goal, instead the band wanted to create a meditative place in which to channel inspiration.

“We could come from any direction we wanted,” Kokal says. “Here we’d been playing the same songs over and over again on tour and being in Joshua Tree it was like a dam was released and all this water started flowing out. Recording and writing this album, we really started to play and interact with each other in a new kind of way. It was the natural next level of getting to know each other and discover our album. I think the element of space became kind of a band member, and we were very conscious of not trying to fill in every silent moment anymore.”

The musicians spent a month in Joshua Tree before returning to Los Angeles, where they continued to write and demo before going into the studio with Flood in January of 2013. The producer, the only person on the band’s producer wishlist, joined the group at Five Star Studios in Echo Park for six weeks. The band was drawn to Flood’s ability to balance the lo-fi aesthetic of a raw demo with hi-fi production, a sensibility they hoped to embrace when recording the new tracks. In fact, several of the demo pieces made their way onto the final tracks on Warpaint.

“I could hear in Flood’s work with PJ Harvey that he was comfortable with having a demo-type feeling to the music sometimes but able to translate that on to a greater level of professional sound,” Wayman says. “He’s got so much experience under his belt and he’s really talented at creating things, making them sound big and luscious. We used a lot of mood-enhancing atmospheric stuff, like synths and electronic drums. We all love hip-hop and trip-hop, which is really mood and rhythm based. That influenced us here.”

“We wanted to make a sexy record,” Lindberg adds. “Something a little more minimal than The Fool. We had so much to express – and still do – but have learned the magic of less is more and truly went in with that frame of mind. We were more mindful and wanted to make room for one another.”

The resulting album, self-titled because this it the truest expression of Warpaint to date, is vast and beautiful, collecting lush, compelling songs that embody otherworldly tones and hushed pauses. There is a hazy sense of abstraction that pervades, leaving each song lingering as the next begins. “Hi,” which Kokal calls “a really beautiful and dark twist to a very conventional songwriting structure,” shimmers with sparse emotional verve while “Keep It Healthy” explores a meditative groove. “Love Is To Die,” a number that emerged almost directly from a jam session, balances soaring melodies with ambient beats. The album finds all four musicians playing in tandem, and indeed much of the album was recorded live in the studio. It merges disparate influences and sensibilities while eventually landing on a cohesive – and unexpected – thematic thread.

“Without sounding trite, the subliminal theme of the album is love,” Mozgawa says. “It's a record that meditates on different forms of love in a poetic manner. This wasn't a preconceived theme – it's just one powerful prevalent thread.”

The musicians have found a cohesion between this new album, The Fool and their 2009 EP Exquisite Corpse, a sort of evolving symbiosis that always comes back to the strong connection between the four players. The album art, created by Chris Cunningham, reflects the collaborative strength and inherent friendship heard in the songs. Cunningham, who is married to Lindberg, is presently working on a multimedia documentary about the group, which he started while the band was in Joshua Tree last year.

“We came up with the idea of making a long short film, a mixture of the kinks and quirks of Warpaint and his kinky and quirky brain and ideas,” Lindberg says. “It is going to be a medley of things. Chris is such a mindful and respectful guy. It's been so wonderful to have someone with such impeccable taste and an endless amount of creativity witness all stages of this record.”

Ultimately Warpaint reveals the next stage of evolution for the group, a truly collaborative effort that showcases both musical growth and a startling depth of friendship. “We thought about this collection of songs like, this is us,” Wayman says. “This is an expression of who we are.”

The show at Mohawk Outdoor on Friday, March 14