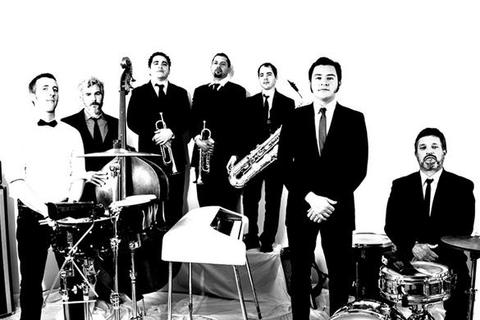 A mambo big-band like you’ve never experienced, bandleader Sergio Mendoza helms one of the most exciting latin music bands operating today. He and his orchestra – which can stretch to 19 pieces – bring a fevered energy and vital approach to classic mambo and cumbia sounds.

Informed by influences like Perez Prado and Chico Che y La Crisis, the band is also directly influenced by Mendoza’s experience playing in Calexico, Devotchka, and Mexican Institute of Sound. The native of Nogales, Sonora has made a mark as a multi-instrumentalist with those celebrated groups and what he has brought back to his own band is an otherworldly- but urgent – synthesis of time and regions.

The orchestra features vocalist Salvador Duran, who dueted with Willie Nelson on “Senor” in the Bob Dylan biopic I’m Not There, and who has performed alongside Neko Case, Iron and Wine, and Glen Hansard.

While Duran’s vocals create that classic vibe, the band’s progressive arrangements and unique instrumentation make for a vital sound that keeps the band well off the nostalgia track. The vihuela, (Mariachi Guitar) lap steel, and Mariachi trumpets along with a baritone sax and a huge percussion section keep dancers on their feet.

The band toured Europe and the US around their first album Mambo Mexicano (Cosmica Records, 2012) and are readying to record a new album for release in Spring 2014.

The show at Javelina on Thursday, March 13