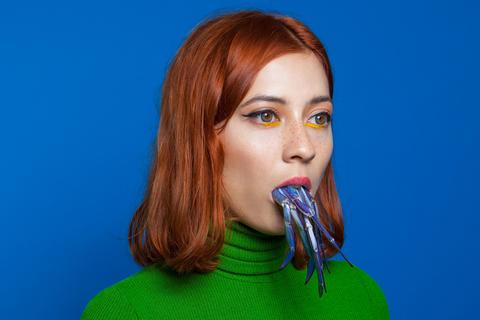 Exercising a natural musical finesse from an early age via every avenue from rap breakdowns to high school punk bands, Chelsea May Wheatley emerges as a nu-pop whiz kid with a style all her own.

Stripping away tedious formalities and taking ownership of a longstanding nickname, Chela runs full steam ahead with production capabilities that stem from eager pre-teen experimentation and a defiant musical curiosity, as well as a voice with a lush soul timbre and enviable range.

It was in 2012 that Chela was finally able to bring her youth of playing with sound in Fremantle, Western Australia to a head in the studio. Collaborating with Ben Ely of cult electronic act Regurgitator to produce her first single ‘Plastic Gun’, Chela’s solo career was officially launched with a confidence and individuality that immediately drew attention from some of the industries most noted producers and songwriters.

Currently back in the studio to write and produce a debut album, 2013 is shaping up to be a big year for Chela. Focused on touring with a full band (members of Gotye, Clubfeet, Lisa Mitchell and Owl Eyes) and lending her writing mastery to other artists, Chela’s latest track ‘Closure’, written with Owl Eyes and Styalz Fuego (Wiley, Aston Shuffle), was released as the first single off Owl Eyes debut LP ‘Nightswim’. The newest single ‘Romanticise’, written and produced with friend and renowned dance producer DCUP, is a perfectly constructed pop tune with an infectious hook about deflecting negativity, complete with tropic, bouncing beats and chiming falsetto.

The show at Maggie Mae's Rooftop on Saturday, March 15