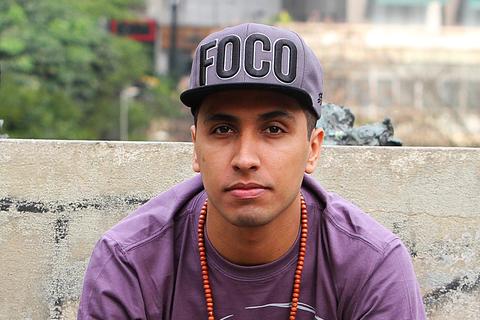 EVOLUTION. That is the word that best describes the 25-year-old rapper Rashid, who has just released his fourth album: Confundindo Sábios (Confusing Sages). All 15 tracks made Rashid’s tremendous growth as an artist evident to the public and pleased not only his Brazilian hip-hop fans since 2008 but also new listeners. In just one month, Confundindo Sábios sold 3 thousand copies and is already one of the most downloaded rap albums in Brazil during the year of 2013.

If you are curious to know Rashid’s latest work, you can watch the video for his new single “Virando a Mesa” (Turning the Table), a partnership with the MPB singer Daniel Cohen and the hip-hop producer Coyote. With over 290 thousand views on the rapper's official channel on YouTube, it was filmed by Rafael Kent (Okent Filmes) and stars the MMA fighter Rony Jason.

Rashid’s rhymes have always been original and powerful, which is precisely why he has won so many rap battles in Brazil before becoming an independent recording artist, but now he is more confident and irradiating an innovative personality. This evolution is the natural result from his very successful 2012 national tour promoting his third album, “Que Assim Seja” (Then So Be It).

2012 was also special for the rapper because Brazilian specialized media really started paying attention to Rashid and he was interviewed by many TV and radio shows and newspapers; appeared as a special guest on Meus Prêmios Nick (Kids’ Choice Awards); was nominated for MTV Brazilian Video Music Awards. But this is just what you get when you show dedication, commitment and love for what you do, and that in Rashid’s case is Brazilian Rap.

Rashid rhymes about politics, Brazil, friendship, resilience, love and music itself. Through his unmistakable flow, we get to listen to a sharp point of view very well combined with a dose of optimism towards the future. His distinct personality continuously attracts to his concerts thousands of fans who can be easily found on Twitter, Facebook and Instagram. Well-respected Brazilian artists such as Kamau, Emicida, Criolo, Max B.O., Dexter, KL Jay, Almir Guineto, Projota e Mano Brown already shared the stage with the young talented MC Rashid. More recently, the Orquestra Metropolitana (Metropolitan Orchestra of São Paulo) made a series of special concerts having Rashid and the female rapper Lurdez da Luz as lead singers.

Journey – Michel Dias Costa, aka Rashid, was born on the North Side of São Paulo. Since the age of 12, he dreamt of rapping on the stage for big audiences. At the age of 16, he started to fight for his dream in Freestyle Battles. Due to his success in the battles, Kamau asked Rashid to participate in one track of his Non Ducor Duco album. This experience made him confident to record his very first EP “Hora de Acordar” (Time to Wake Up) in 2010 and every year since then Rashid releases a new album: “Dádiva e Dívida” (Gift And Debt) - 2011, “Que Assim Seja” (Then So Be It) - 2012, “Confundindo Sábios” (Confusing Sages) - 2013. In Brazil, he has starred many ads, including a Basketball campaing for SporTV, and also started a successful street wear collection http://www.murobr.com/index.php?route=product/category&path=60_74.