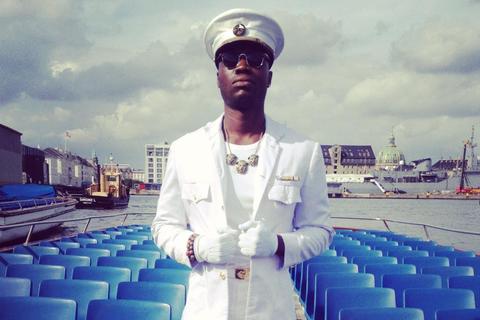 It’s not often that you’d expect to find the bass-heavy sounds of urban London and the rhythmic beats of Nigeria sitting together on a track, but if there is one MC who’s not shying away from doing exactly that, then look no further than Afrikan Boy.

Born Olushola Ajose in southeast London to Nigerian parents, it’s not hard to spot the impact his Nigerian heritage and British upbringing has had. Fusing together his passion for grime, rap and afrobeat with a love for a good hook, Afrikan Boy is steadily carving out his own niche in the MC circle. With a self assured style - custom ankara threads and the obligatory pair of trendy kicks are staple part of his wardrobe - his lyrics are as dynamic as his musical tastes, citing everyone from Fela Kuti, Shina Peters and King Sunny Ade to 2Pac and Dizzee Rascal as influences.

Following the release of his first mixtape ‘What Took You So Long’, Afrikan Boy continued to captivate audiences with the punchy freestyle ‘Look At Me Now’ featuring Boya D, the ‘Pon Pon Remix’ (a tribute to the late Nigerian artist Dagrin) and the chilled out sounds of ‘Dissertation’. After a break from music to complete his university degree, AB showed no sign of slowing down the pace.

Already championed by the likes of DJ Semtex (BBC Radio 1/ 1Xtra), The Guardian,
Wonderland, Afrikan Boy is a firm favourite among industry heavyweights. It was the grime infused ‘One Day I Went To Lidl’, a humorous ode to the discount supermarket, that caught the ear of underground fans and fellow British rapper and Grammy Award nominee, M.I.A, that soon led to guest appearances on the ‘Paper Planes’ remix and ‘Hussel’ on her ‘Kala’ album as well as a stint on both the ‘Kala’ and ‘People vs. Money’ world tours.

A collaboration with US hip hop veteran DJ Shadow on ‘I’m Excited’ once again created the chance for Afrikan Boy to push his experimental boundaries, a feat that didn’t go unnoticed by BBC Radio 1 aficionado, Zane Lowe who crowned it ‘Hottest Record In The World’.

Afrikan Boy joined the prestigious ‘Africa Express’ 8 cities summer tour of the UK as part of the London 2012 cultural Olympics, where he shared the stage with the likes of the legendary Femi Kuti, Baaba Maal, Damon Albarn, Rizzle Kicks, The Noisettes, Fatoumata Diawara, Mark Ronson, Spoek Mathambo and Paul McCarthy to name but a few, as he continues to make his presence felt on the live circuit.

In early 2013 another heavy collaboration with Danish super producers Silver Bullit saw Afrikan Boy as main guest artist on all tracks by on a project called ‘Afrikans in Denmark’ The 5 track EP already getting another step forward for what he coins the Afro-grime movement.

Afrikan Boy is now busy wrapping up his highly anticipated debut LP, ‘AB CD’ due for release on Yam Records Spring 2014. In the meantime you can catch him on his latest Single ‘Hit Em Up’ which samples the great FelaKuti’s 1965 track Wa dele wa royin’