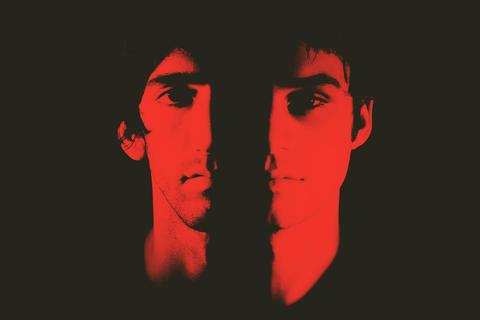 IN THE SPACE BETWEEN what had become near constant touring for Delicate Steve, practice was scheduled at bandleader Steve Marion's home in rural Sussex County, New Jersey.

Fans of the cult-favorite band would recognize the pastoral setting from band-posted photos on the internet; horses grazing, green hills, mountain lakes. They call it upstate, the part of New Jersey that doesn't have a reality show.

Christian Peslak, the group's guitarist arrived at the house first. The weather that had been threatening all day came. Winter storm, too warm. Rain took the Paulinskill River over its banks and washed the road out period. Practice ain't happening with the full band today.

Two friends in a room now. Marion puts down his guitar and gets behind the drum kit. Peslak starts strumming the opening chords to "Dreams," a new song they'd finish within the hour. By the end of the weekend, neither had left the house. There were 7 new songs. And a new band.

They named it Saint Rich.

CHRISTIAN AND STEVE have been orbiting each other for nearly 10 years in a surprisingly vibrant local scene. Before Peslak was drafted as a guitarist into the Delicate Steve touring band, he was a songwriter and multi-instrumentalist who had completed an album's worth of songs by the time he was 15. It was then Peslak was approached cold by Marion (still in high school himself) -- an enterprising local guitarist who had begun producing and arranging records who had heard Peslak's demos through a friend.

The two struck up a friendship, worked together, and jammed when they could. Three years later Steve had recorded 'Wondervisions' as Delicate Steve, an instrumental record released by David Byrne's Luaka Bop label, that entered the world via a glowing New York Times review. With the vocal appreciation from many of the indie rock world's beloved bands, [Dirty Projectors, Yeasayer, tUnE-yArDs, Built to Spill, Akron/Family, Ra Ra Riot, Fang Island, Zach Hill] and constant touring, the band began their own ascent into the indie-pantheon.

Since then, Peslak has provided the rhythmic guitar bedrock to Marion's wandering melody lines in Delicate Steve. On Beyond The Drone, the debut album from Saint Rich, it's fair to say that Marion has created the bedrock for Peslak's wandering.

Peslak sings with a natural ease, a spirit that finds its way into all corners of Saint Rich songs. There's reference here to the Laurel Canyons, old and new, to Bearsville, to any place where assorted love songs were recorded in a space you imagine had vaulted wide beamed ceilings with waters running close outside.

Beyond the Drone is the kind of record you continue to find new songs on after listening for a few months. It's entirely self-possessed and a vital heart pumps through the tape. It's a record built on the foundation of 10 year's playing together, but born in the urgency of a flood. You will hear all of that.