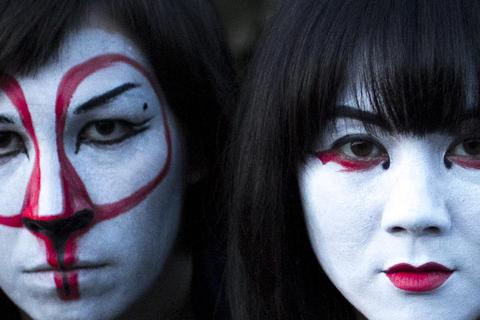 Yamantaka // Sonic Titan was formed in late 2007 by Alaska B and Ruby Kato Attwood. Alaska and Attwood are Canadian performance artists: they wanted to make forests out of charging drums, to raise cliffs with singing voices. So they wrote songs, they painted cardboard, they sewed costumes and hacked old electronics, making something out of nothing, taking scraps of their hybrid Asian and diasporic identities, becoming legendary.  The group performed in galleries and concert halls, even a shopping mall's echoing underground food-court. They used pop and noise music to tell stories, to remind watchers of how close they are to mythology. And then they made a record.
Released in 2011, YT//ST's self-titled LP reinvented the group.  Here was one of the decade's most exciting debuts.  Gorgeous and pummeling, with Attwood's ghostly soprano, Alaska's gargantuan drumrolls, riffs as deep as the Mariana Trench. Soon Yamantaka // Sonic Titan were asked to play Neutral Milk Hotel's All Tomorrow's Parties festival in the UK, collaborating with Adult Swim, cavorting with Boris,  and shortlisted for Canada's Polaris Prize.
Meanwhile, YT//ST continue to explore and disrupt other mediums. Their queer rock opera, "33 // UZU," premiered at the 2012 Pop Montreal festival. A 16mm video for "Hoshi Neko (Little Star)" screened at festivals in Cairo and Victoria, garnering a Prism Prize nom. An original video-game, Your Task//Shoot Things, is in development. There are film, documentary and animation projects. And the new LP, UZU, will be released on October 29th on Suicide Squeeze Records in the US and on Paper Bag Records in Canada.