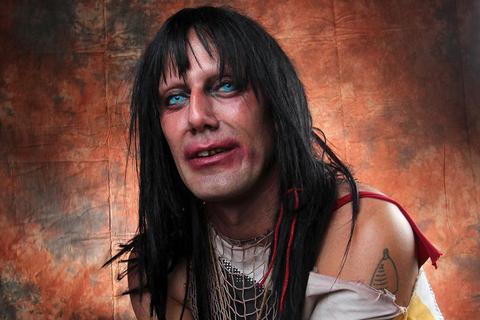 CHRISTEENE is a sexually infused sewer of live rap and vile shamelessness, capable of adapting amazingly well to all styles of music.

Attempts at gathering personal information on CHRISTEENE concerning age, origin, race, religion and even gender have proven fruitless, leaving the public to rely primarily on a highly stylized collection of music videos released through the singer’s collaborative efforts with award winning filmmaker and cinematographer, PJ Raval…who remains silent on the subject of their relationship.

It is noted that CHRISTEENE commands a stage presence of furious intensity accompanied by a strict regiment of hardcore dance and destructive choreography. The singer’s impressive sound arsenal showcases a wide range of musical appreciation and mastery ranging from Electro to R&B, Hip Hop to Dub Step, with titles including ‘Fix My Dick’, ‘Tears From My Pussy’, ‘African Mayonnaise’ and ‘Bustin’ Brown’. These songs, written by the artist, offer an intimate and fascinating glimpse into the private and sometimes heartbreaking experiences of this talented nightmare.

Reports from live shows describe scenes involving butt plugs tied to bouquets of balloons being released into the air from CHRISTEENE’s arse, intimate and bizarre confessionals over tea, backup boys in handmade Panda masks urinating on canvas sacks containing the singer, and a DIY anti-fashion wardrobe styled from the forgotten scraps of society. Appearing alongside CHRISTEENE are two sexually distinct Backup Boyz, T-Gravel and C-Baby, along with accompanying DJ/ music producer, JJ Booya, rumored to be the entertainer’s third cousin.

It should be noted that CHRISTEENE’s music, media and live shows have cast an unprecedented net over a demographic including married men, dykes, queers, single women, bears, fraternity brothers, motor hogs, and people of the medical profession; clearly signifying a rapidly growing pandemic on popular culture as we know it.