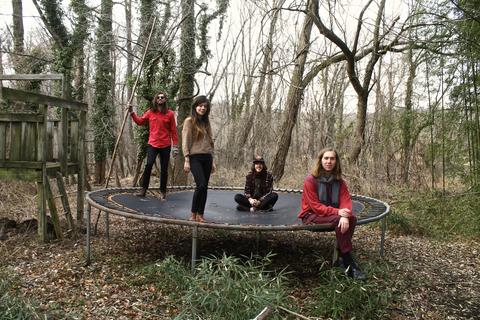 When the three members of Quilt arrived in New York City in April to begin the intensive recording process for their second album, the new and aptly named Held in Splendor, they stepped directly into spring. Anna Fox Rochinski, Shane Butler and John Andrews had spent much of the previous several months clutched away at "The Puritan Garage" in Boston's Charlestown, shielding themselves from a winter of blizzards with the haven of their practice space and a set of fresh songs.
Since the release of their 2011 self-titled debut on Mexican Summer, they’d become more than kids just out of college. They’d become a bona fide hard-touring band, with stories to share from the road and experiences to distill into the narrative of new music. Though they continued to write and arrange tunes together, always an essential part of Quilt’s creative process, they brought songs to one another, too, making and modifying demo tapes for the first time. No longer rookies, Quilt began to approach their music like a lifeline. Coming to New York, then, just as the magnolia trees bloomed and the season of new life began to blossom, Quilt got to work.

“That was,” says Rochinski, “a magical time to be making a record.”
Indeed, when Butler talks about recording the kaleidoscopic Held in Splendor, he seems to speak of an ornate children’s playground. Whereas their first album was made mostly for free and mostly by friends over the course of a year of starts and stops, in sessions that captured the early and elemental and exciting efforts of a band finding its footing, Quilt entered the proper in-house studio located beneath the Mexican Summer offices in Brooklyn for this one. They’d allocated a solid month for recording, and they clocked full days, every day, with Woods member and producer Jarvis Taveniere.

The approach was wide-open: They tuned drums and recorded the same song with multiple microphone set-ups. They added bass and invited friends who added saxophone and violin, cello and steel guitar. They built this album together.

“We would go in for 10 hours a day, six days a week, and we just made sounds and jokes for the entire time. It was an incredible way to make a record,” Butler says. “We were able to flesh out the songs in crazy ways we’d never imagined: There are all these loop-based drones beneath the songs, and we used more pedals than we’d ever used before.”
Held in Splendor is is an audacious pop-rock record with cascading harmonies and billowing textures, punchy rhythms and snarled guitars, wonderful depth and resplendent peaks. “Mary Mountain” takes hazy Summer of Love memories on a mid-summer road trip in a gleaming muscle car. “Tired & Buttered” invites Booker T over for an energy-addled jam in the garage. “The Hollow” twinkles like Fleetwood Mac and Galaxie 500, with sweet singing backed by the lap steel sighs of young acoustic guitar star and longtime Quilt pal Daniel Bachman. Held in Splendor is an album of personal poetry and public questions, confessions and aspirations—really, these 13 tracks are their own playground, brimming with the sort of unapologetic energy and wonder that turns simple songs into absolute anthems.

“We’re really attracted to records where each song has its own voice. We wanted to focus on what each song had to say,” Butler explains. “Having the studio, demoing the songs and knowing each other better as musicians helped make that happen. That was a really exciting process for us.”