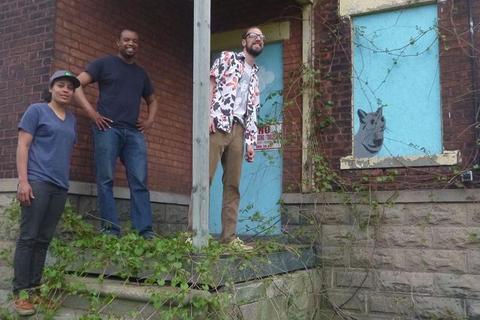 Tyvek is a brand of flashspun high-density polyethylene fibers from Detroit, Michigan.

Tyvek began in 2004 when Kevin Boyer, Larry Williams, and Matt Ziolkowski, three friends and music fans fed up with the redundant garage rock then clogging the proverbial pipeline, decided to form a punk band. In late 2012 original drummer Matt Z. stepped down, replaced by Beren Elkine (formerly of Eat Skull, the Intelligence) whose style is at once driving and loose, meshing seamlessly with Tyvek's signature sound while revving it up. Her insistent beat moves the crowd and propels the band into new territory.

Their latest full-length, On Triple Beams (In The Red, 2012), has Tyvek venturing into a more roomy, melodic headspace without sacrificing any of their bite or thud in the process.

The show at Remedy on Wednesday, March 12