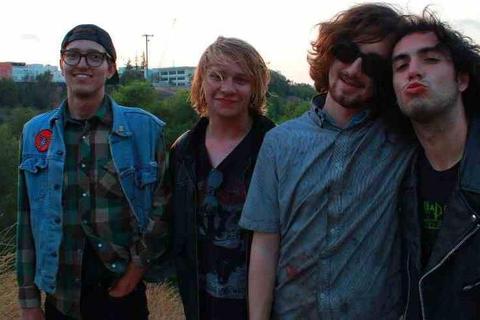 After nine years of existence, Fullerton quartet, Audacity, has left the garage of their humble 9th grade beginning, but the garage hasn’t left the spirit of their music. With two LPs, a slew of EPs, and no shortage of touring under their belts, Audacity are hardly a wet-behind-the-ears rock band. Their razor-sharp musicianship and high-energy performances were solid enough to earn them the privilege of serving as the backing band for both King Tuff and Todd Congelliere (Toys That Kill, Underground Railroad to Candyland).

Audacity’s latest full-length Butter Knife out October 29 via Suicide Squeeze is still, at its core, a garage rock record. The economic instrumentation, grit-tinged guitar jangle, pogo-prompting tempos, and sing-along choruses can all be traced back to the seminal Nuggets collections. But ultimately, Butter Knife doesn’t sound so much like an homage to The Sonics as it sounds like a young band striving to make the most ebullient and jubilant noise possible. The new single, “Hole In The Sky” showcases the band’s gift for the on-the-dime changes, sophisticated melodies, and clever instrumental interplay.

The show at Remedy on Wednesday, March 12