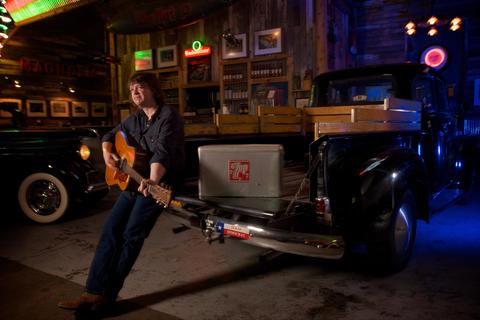 Listen to Late For My Funeral

Three years ago, Mike Stinson took a big chance. After clawing his way to the top of the country music club scene in Los Angeles where he was described by Billboard Magazine as the king of the neo-honky-tonkers, Stinson, who wrote Dwight Yoakam’s stellar “Late Great Golden State,” packed a U-Haul, chucked his place in the West Coast pecking order, and moved to Texas to start fresh.

And Texas certainly had an effect on the cerebral Virginian who called L.A. home for 18 years. He fell in love with the space, the torrential rains, and the laid back feel of his new home, Houston. With two stellar, critically praised albums of hardcore honky-tonk and “barnyard rock and roll” in his LA past, immediately upon arrival in Texas he dropped The Jukebox In Your Heart, recorded with Jesse Dayton and his band at Willie Nelson’s Pedernales Studios. “No One To Drink With” from the album was voted best song of the year by the Houston Press in 2010.

But while these tunes certainly received a Texas treatment under Dayton’s guidance, these were songs written prior to the Texas move. Stinson’s already-completed next album, Hell and Half of Georgia, is a mixture of muscular Joe Ely-ish roadhouse bruisers and sawdust-floor tonkers mostly written since relocating. And with noted roots producer R.S. “The Ionizer” Field commanding the ship, Stinson completed the best sounding, most hook-filled album of his career.

A rare voice in this cluttered world of country pop and banjos-for-the-sake-of-banjos alternative country, Stinson has set the bar as high it goes with the monumental “This Year.” One listen to this gripping song establishes that Stinson’s pen is as sharp as any. Stinson is the king of broken hearts, and with “This Year,“ he captures the torment of love like few can. He also shows his cleverness by turning his problems with punctuality into a scorching Bob Dylan-ish burner called “Late For My Funeral.”

Anyone who knows Stinson knows he’s a stubborn cuss, and he lets his attitude roam with loose rein on radio-friendly head-bobber “May Have To Do It” with its slightly dangerous warning: “May have to do it, don’t have to like it.” Suffice to say the witty troubadour has had some day jobs in his past he’d just as soon forget. He also works in the Dylan-ish verse, “Aunt Jemima said that Uncle Sam wants to send me to Afghanistan / He‘ll bring me home with a family plan and I hope you don‘t mind the sand.”

Fact of the matter is, Hell and Half of Georgia elevates Stinson’s game to new heights. And with his crack road band, he remains one of the only bands on the circuit who can do a four-hour two-step honky-tonk gig one night and do an hour-and-a-half rock showcase the next without a change of expression.

It’s no wonder longtime Los Angeles writers like Robert Hilburn and Chris Morris flipped for Stinson’s legitimacy, his realness, his utter sincerity, and his ruthless pursuit of his art. Texas writers like the Houston Press’s music editor Chris Gray did too: “Mike Stinson moved here as the pen inside Dwight Yoakam's "The Late Great Golden State" and soon gave Houston its best honky-tonk album of the young decade, The Jukebox In Your Heart. A wounded warrior-poet like Bruce Springsteen ("Atlantic City" is a set highlight), Stinson has recorded an as-yet-unreleased follow-up that steps on the gas and lets the heartaches fly.”

The leader of one of the hardest working bands around, Stinson is winning fans one stellar song and one barn-burning show at a time.

The show at Continental Club on Saturday, March 15