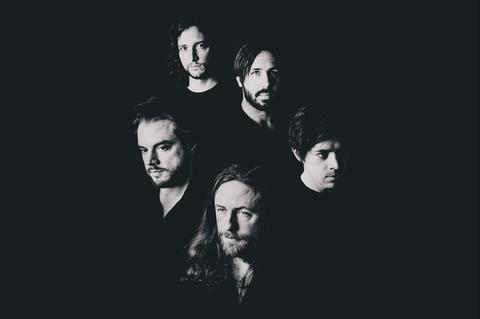 Over the course of the last 2 years, Austin-based quintet Surly Gates has worked to craft a sound that defies easy genre classification, but their DNA is undeniably rock and roll. The songs exude a classic, decidedly American sound, pulling from garage, desert, west coast and southeast sounds as inspiration and blending them into a shimmering, harmony-cloaked, reel-to-reel mosaic. Founding members James Webber and Jonathan Lennartz wandered into an abandoned compound in East Austin with a handful of dusty, ramshackle, just-north-of-Mexico songs, and set up some microphones. Rusty Boyer soon joined them to begin the steeping and steering process with more guitar work and vocal harmony technique developed during a rust-belt upbringing. A short time later they were joined by Marshall Owen, who contributed bass arrangements, more harmonies and a mind-bent Mason-Dixon influence. Recently, David Leland Horton joined the group as drummer and harmonizer, fulfilling the prophecy of the band's nomadic legacy and completing the lineup. Surly Gates creates a hazy atmosphere with darker subject matter, ramshackle sensibilities and deceptively detailed arrangements. The songs are murky gems, intimate and substantial, delivered without irony and devoid of forced lyrics or starry-eyed naivete. The band captures an honest, unique, lived-in sound that outshines with craftsmanship and depth. Download EP free at www.surlygates.com or http://surlygates.bandcamp.com.

"Although this Austin ensemble is yet to record their debut full-length, the Surly Gates’ have already created a promising collection of period-perfect gems: Gorgeous harmonies and jangly chords are delivered with a bittersweet loveliness; resurrecting the ghosts of endless summers past."
- Chybucca Sounds, 2013

"Austin, TX has a proud psychedelic heritage which stretches all the way back to the mid sixties and legendary acts like the 13th Floor Elevators, Golden Dawn and the ridiculously fabulous Bubble Puppy (who moved to Austin from San Antone). You can now add Surly Gates to this select group of quality lysergic tunesmiths..."
- The Active Listener, 2013

"Mixing 1960s harmonious garage rock vocals with the slow churn of the more modern psychedelic movement, Surly Gates has proven to be a band to keep an eye on right out of the gate."
- Dan Nemer @ Ongakubaka, 2013

"Like dipping into Owsley's punch bowl with an over-sized ladle and taking a big swig, Surly Gates reveal a space in time like a 60's flashback. The Ten Years After reference is not a mistake, reminiscent of that seminal TYA album, this Austin band's debut leaves trails for others to take notice of."
- Popastunes, 2013

The show at BD Riley's on Wednesday, March 12