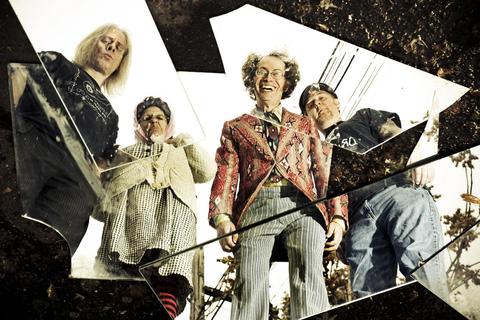 Listen to You Give Me Hard-On

Little Fyodor is both a person and a band. Much like Alice Cooper in the early years, except in this case, the person came first!

Like Dostoevksy, Little Fyodor is obsessed with alienation and spiritual displacement and the fragility of human psychology. But he mixes these dour sensibilities with quirky, electrifying punk rock and a sense of humor, inspired by the likes of The Ramones, Jonathan Richman, Pere Ubu and Wild Man Fisher. The result melds rock 'n' roll power with a nerdy eclecticism, including elements of novelty and the bizarre, into songs that express how it feels to not fit into normal society nor to understand one's place in an indifferent universe.

Little Fyodor's musical proclivities date to 1983 when he was in a band called Walls Of Genius, producing and trading experimental cassette tapes full of crazed psychedelic improvisation, before going solo to concentrate on the more pointed twisted punk satire of his angst ridden original songs. Before long he met a sensual, feral bag lady named Babushka in a potholed Denver alley who joined forces with Fyodor to perform as a duo for many years while Little Fyodor employed the help of various rock musicians to release an EP called Slither and LP's (first on vinyl then CD) called Beneath The Uber-Putz, Idiots Are Closer to God and Dance Of The Salted Slug. This millenium has seen the release of Peace Is Boring and a tribute by 20 artists called The Unscratchable Itch, both put out by Public Eyesore, and a compendium of the early releases called Boyd Rice Presents The Very Best Of Little Fyodor's Greatest Hits, put out by Discriminate Audio. Little Fyodor & Babushka finally allowed a rhythm section to join them on stage in 2005 and the current lineup, featuring Amadeus Tonguefingers on bass (and guitar) and Tricky Dick Wikkit on drums, first congealed in 2010 and is currently working on an EP to be called Truly Rejected after a Denver magazine of the same name that put Little Fyodor on the cover of its first issue! All Little Fyodor releases can be attained at littlefyodor.com.

The show at BD Riley's on Wednesday, March 12