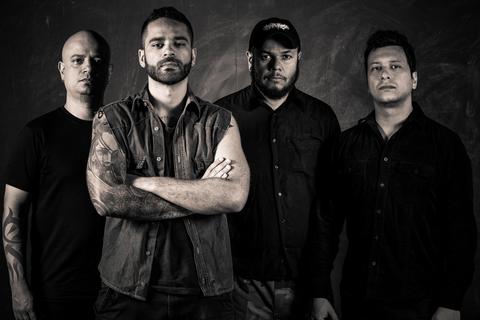 Brazilian metal outfit Eminence’s new album, The Stalker, marks its first album since 2008’s highly regarded The God Of All Mistakes. The Stalker finds Eminence’s extreme approach to melodic metal pushed even further than before. It’s an album that Metal Sucks declared would “good-naturedly brass-knuckle your ass into the ground.”

Recorded at Minerio de Ferro Studios in Belo Horizonte, Brazil, The Stalker reunites Eminence with Danish producer Tue Madsen (Moonspell, The Haunted, Sick of It All). “He is a great producer and a good friend of the band,” explains guitarist/founding member Alan Wallace.

“We spent an entire year producing this album, and worked really hard together to make The Stalker become a reality.” The album also boasts a guest appearance from Sepultura bassist and longtime friend Paulo Xisto Pinto Jr. on three tracks, including “Veins of Memories,” which received its world premiere from Revolver Magazine. “It was a great pleasure to once again work with my dear friend,” says Wallace, who also plays with the Sepultura bassist in the Brazilian metal project The Unabomber Files. The Stalker also features a guest appearance
from bassist Paulo Roberto Diniz,(aka PJ) of famed Brazilian pop rock band Jota Quest on the song “Unfold.”

Upon its release in the summer of 2013, The Stalker earned high praise from metal’s top tastemakers, with Metal Injection praising the work as a “solid mix of death metal and groove goodness, without bordering into nu-metal nonsense.” “As far as brutal and melodic albums go so far this year, you’ll be hard-pressed to find something better than Eminence’s new album,”declared Metal Insider”, who teamed up with the band to offer The Stalker as a free download.

Formed in 1995, Eminence quickly cultivated a strong following in the metal underground scene of their home country and in Europe. The group made its live U.S. debut in the autumn of 2012 during New York’s CMJ Music Marathon, performing on a boat with metal icons Prong. That performance led The Village Voice to declaring Eminence as “a band to watch.” The band made a triumphant return to the States in spring 2012 at SXSW, with plans for a proper North American tour in the works. Before that, though, Eminence will embark on a European headlining tour.