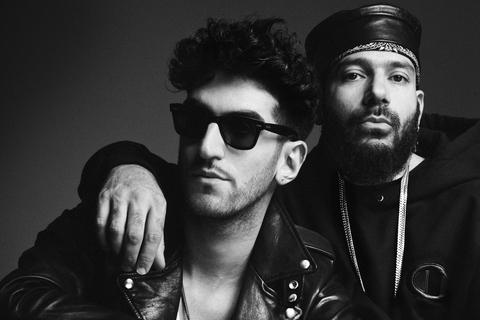 Imagine, if you will, a yacht. It’s forged of gold and strong African teak, bobbing gently at anchor somewhere between the French Riviera and Detroit. A statue of the late Roger Troutman is affixed to the stern like a guardian angel. The ladies of Klymaxx wander the decks serving strawberries and cream on silver platters. Sylvester himself is the skipper, and Hall & Oates are down below, keeping the engines in shipshape. This is the S.S. Chromeo, and the two men who create the smoothest of music under the same moniker are at rest aboard, preparing for another global voyage of lovers’ funk ambassadorship.

Here we have Dave 1, the suave professor, the voice and intellect, enjoying a rosé as he ponders French literature. And with him we have the one and only P-Thugg, the brawn and the body, sipping on the ghetto cocktail known as Thug Passion and proudly going through his mental rolodex of jeep beats and funky flourishes.

The men of Chromeo are about to release Business Casual, which is their third full-length album and a testament to the growth and further sophistication the band has undergone over the many years they’ve been collaborating. After their sophomore release, Fancy Footwork, pushed them into the stratosphere of party-rocking, club-banging, and heart-thrilling electrofunk, we might consider Business Casual their postgraduate work. Where does a group go after mastering their craft? Do they rest on their laurels? Do they retreat into self-parody? Neighbor, please. Chromeo, in 2010, have pushed forward into yet newer levels of song craft and body moving music that is respectfully indebted to its noble inspirations while still being fully contemporary. Are there lush string arrangements on “Don’t Walk Away”? Do we have Moroder-esque analog synth layers draped all over “Don’t Turn The Lights On”? Is there a fully authentic French ballad (don’t forget, Dave and P are of the Québécois persuasion and will never abandon those roots) in “J’ai Claqué la porte”? Well yes, actually, to all of the above.

But what’s this we have here? The flip side of Chromeo, the emotional gangster tracks, are still here on Business Casual, represented by titles such as “Hot Mess,” “I’m Not Contagious,” and “You Make It Rough.” And, newly added to the roster, we have the straight-up pop, vanilla in the best sense (creamy and smooth), of “The Right Type,” a get-up-and-go tune in the greatest 80s tradition, and the album closer, “Grow Up,” which almost sounds like golden era Billy Joel backed up by Cameo. How real is that?

Lyrically, Dave continues to mine the rich vein of affairs of the heart. Is there really any other topic that Chromeo needs to cover? Arrogant ladies, dancefloor seduction, boudoir skills, love gone wrong, and knights in shining armor… Chromeo does all this and more with their trademark Franco-insouciance-that-borders-on-coolness and their always sexy worldliness (pause).

In these uncertain times of financial upheaval and musical mediocrity, Chromeo’s Business Casual is a testament to the fact that inspirational funk shall always prevail. Vive le Chromeo!