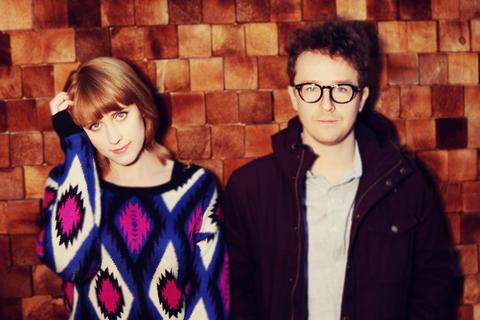 Jenn Wasner and Andy Stack of Wye Oak have spent most of their lives in Baltimore, Maryland. But after two years of constant touring with Civilian, their highly lauded 2011 album, they landed on opposite sides of the country with an unforeseeable future ahead. Despite this newfound uncertainty, the two bandmates embraced their physical distance, passing ideas back and forth, allowing new work to evolve in their respective solitudes. Shriek is Wye Oak’s fourth full-length and the culmination of their intent to express the emotional and intuitive self by acting out animalistic exclamations through cathartic release. It is their most personal and confident declaration yet.

Newly inspired by playing bass, Jenn took up songwriting in a setting where the guitar did not dictate harmonic boundaries or require a call-and-response relationship with her voice, a hallmark of previous Wye Oak records. With her phrasing freed, now it is often Andy who interacts with Jenn’s vocals, playing syncopated and meditative keyboard parts, and the duo’s collaborative arrangements provide a backdrop in which both the arcs of melodies and the new rhythmic elements flourish.

To engineer, mix, and co-produce, they brought in Nicolas Vernhes of the Rare Book Room in Greenpoint, Brooklyn, whose inventive and forward-thinking approaches to production complemented their new direction. The result is a record of indisputable humanity. Shriek is a complete narrative of disorientation, loss, renewal, and empowerment.