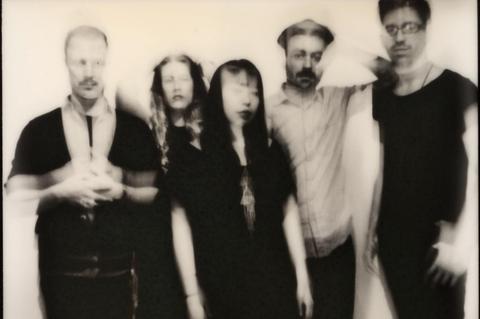 The Belle Game´s debut album, Ritual Tradition Habit, begins with bashful guitars, a soft wave of cymbals, and a pair of ambiguous phrases. `Ritual´, a sweetly haunting soundscape, lasts only a few moments before fleshing out a procession of wild and witchy tunes, full of melancholy, mythology and symphonic power.

Led by the hypnotic vocals of Andrea Lo, The Belle Game take intricate guitar and keyboard lines, anchored by dark pop rhythms, and weave them into gorgeous, graceful melodies. . . the end result still retaining the rawness of a boozy confessional. Canadian indie authority Exclaim! describes their music as “…indie-rock at its best: texturally layered, with echoing guitars, infectious rhythms and horns, and lavished in hooks”.

“Ritual Tradition Habit” was recorded by John Raham (The Be Good Tanya’s, Frazey Ford). It’s a journey through 12 beautifully layered tracks, interrupted by the occasional chant, hymn and instrumental rumbling. Among them the spooky blues ballad, ‘River’, a song Pitchfork Media referred to as a “showstopping, extroverted piece of musical theatre”. The song is concerned with shedding the past, which builds into Lo’s heartfelt salvo: “There’s a place that I found / Full of sins that you’ve drowned / I’ll be your river/ I’ve been your river since we were kids.”

Over the last two years, the band has been quietly gathering acclaim around the world, starting with major festival appearances in support of their two independently released EPs, and subsequent signing with hometown label, Boompa Records. They followed this up by playing coveted opening slots for Gotye, Karkwa, Unknown Mortal Orchestra, Born Ruffians, Bahamas, and more.

Recently, The Belle Game released the ‘Wait Up For You/Wasted Light’ 7″ through Bella Union (UK/EUR). Their full-length album, “Ritual Tradition Habit” was released in April, 2013 by Boompa Records.