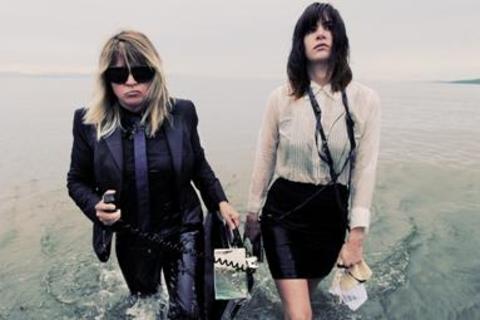 Do Not Engage
(Biography)
“We never really consciously have a plan of action. If you call a plan of action ‘just get better,’ then that’s the plan we went with for this album.”
So says The Pack A.D. drummer Maya Miller of the process that led the hard-slogging East Vancouver duo to its fifth album and Nettwerk debut, Do Not Engage. And it’s hard to disagree.
Long celebrated on the fringes of Canada’s endlessly fruitful indie-rock scene as a feral live act non pareil and a band destined to eventually make that one record that finally puts it over the top, The Pack A.D. has delivered the album that should finally, genuinely – yes – put it over the top. The tirelessly hard-working and hard-touring duo of guitarist/vocalist Becky Black and powerhouse drummer Miller doesn’t even consider Do Not Engage as a fifth recording, in fact; it’s moved so far beyond the primal banshee-blooze of its first two albums, 2007’s debut Tintype and 2008’s Funeral Mixtape, that they no longer considers them part of their catalogue. “I don’t count the first two anymore as they feel so far away from what we do now,” Miller told the Vancouver Province earlier this year.
Miller’s selling The Pack’s past achievements a bit short in that statement, but whatever. Black and Miller have pretty much lived in their van for the past six years – two vans, actually, as the first succumbed to exhaustion on the point of disintegration after steering them to a couple hundred shows within the year between 2010’s noticeably focused step up, We Kill Computers, and 2011’s exceptional Unpersons (accurately described to the Toronto Star by Miller at the time as “a really loud, fun punk record”). But, with Do Not Engage, The Pack A.D. did indeed get better. Much better. Much harder, much nastier, more versatile and much more confident.
Lead single “Battering Ram” maintains a tether to the stormy alterna-Delta dystopia from whence The Pack first sprang. But the band’s repertoire has expanded to take in the churlishly infectious stoner-rock of “Creeping Jenny,” the bittersweet pseudo-shoegaze ache of “Airborne” and the post-Pixies retro-grunge fuzz of “Big Shot,” which sounds like Weezer being joyously molested back in the day by Babes in Toyland and Hole at the same time. “Rocket,” for its part, proffers a concise picture of how far The Pack A.D.’s self-imposed program of conscientious self-betterment has brought them: it announces Black and Miller’s arrival as nuanced, pop-savvy arrangers and masters of dark lyrical wit, and also Black’s maturity into a heart-tugging emotive singer.
“We’ve been getting more straight-up rock, I think, and I guess a little weirder,” says Miller.
“It’s sort of a natural evolution, how we’ve changed,” adds Black, crediting some of the new record’s advances to a habit shared with Miller of “listening to too much psych-rock and zoning out. I really like that genre of music.”
“I guess some bands never change but, I don’t know, I think most bands do. You’ve gotta keep trying new things or it’s just boring.”
Do Not Engage reunites The Pack A.D. with Detroit producer Jim Diamond (White Stripes, Electric Six, The Mooney Suzuki, Dirtbombs), a friend-turned-collaborator who insisted upon working behind the boards for Unpersons – a record that would go on to earn the band its first Juno Award nomination in 2013 for “Breakthrough Group Of The Year” – and has proven himself something of an ideal “ghost” third member by coaxing Black and Miller to their finest work yet on Do Not Engage. Within the bleak confines of a converted Motor City chicken-processing plant, no less.
“He’s very easy to work with,” says Miller. “He really gets us. All his instincts are very much anything that we would think of at any given time. We’re all sort of organically working together and it’s really easy. It’s just like friends hanging out. We didn’t go out looking for a producer, let’s put it that way. That came naturally. We were friends first and it kinda went from there, and that’s how we try to approach everything with our music.”
“We like the same things, I think,” adds Black. “We have the same ideas. He likes to bring out a lot of low end and every choice that he makes, I’m like: ‘Yeah, that’s a great idea.’ There’s a good connection there, I guess.”
With its most confident and original recorded calling card to date now in hand (“Let’s put it this way,” says Miller wryly, “I don’t hate this album yet, and I usually hate them fairly quickly”) The Pack A.D. will continue to do what it has relentlessly done since the beginning – albeit this time on a larger, more international scale.
“We’re probably gonna tour this one even harder,” says Miller.
“We record an album and then we kinda have nothing to do except tour,” affirms Black. “This is our only job. We’re itching to tour.”