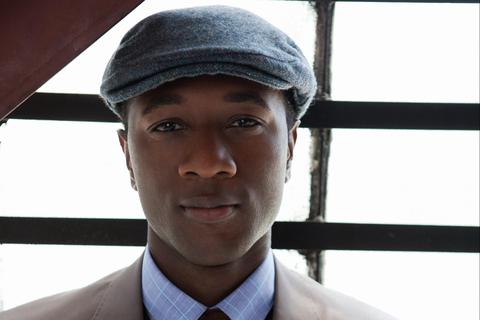 With “Wake Me Up”—the 2013 mega-hit he sang and co-wrote for Swedish DJ Avicii and saw climb to #1 in 22 countries across the globe—Aloe Blacc proved himself a singer/songwriter with an irresistible power to capture the complexities of human emotion.

Adding an of-the-moment twist to the music of legends like Sly Stone and Stevie Wonder, Lift Your Spirit is built on songs that pair Blacc’s poetic yet incisive lyrics with huge hooks and relentless feel-good grooves.

The follow-up to his 2013 EP Wake Me Up—whose title track serves as an acoustic version of the Avicii single that’s emerged as the fifth best-selling dance/electronic song in SoundScan history—Lift Your Spirit finds Blacc teaming up with premier producers like Pharrell Williams, DJ Khalil (Eminem, Drake, Kendrick Lamar), and Rock Mafia (No Doubt, Miley Cyrus) to achieve a slick and smooth retro-soul sound.

“On my last album I paid homage to the music of Curtis Mayfield and James Brown and Al Green,” says Blacc of 2010’s Good Things, which featured his breakthrough hit “I Need a Dollar.”

“But for this one I wanted to go in a new direction and create a new, updated sound.”

To that end, Lift Your Spirit expands Blacc’s sonic approach by amping up his soulful musicality with a fiery rock & roll energy, razor-sharp hip-hop edge, folk-influenced lyrical sensibility, and pop-inspired ease with melody.

“After working with so many different styles of music over the years, I’ve found this place somewhere between folk and soul that feels really true to my vision,” says Blacc, who began writing rap lyrics at age nine, put out his first hip-hop mixtape in 1996, and released his soul/R&B-laced debut album Shine Through in 2006. (A Southern California native born to Panamanian parents, Blacc is also well-schooled in salsa music, and has closely studied everything from psychedelic rock and funk to reggae and dancehall.)

“One of the reasons it was so great to work with Khalil is that he understands all the genres that have influenced me—from jazz to folk to Brazilian music to pop—and knew how to help me tap into those influences and make it sound amazing,” Blacc adds.

Kicking off with “The Man” (a sweetly boastful single that gives a sly nod to Elton John’s “Your Song” and climbed to the top 10 on Billboard’s Digital Songs chart in early 2014), Lift Your Spirit reveals both Blacc’s musical adventurousness and graceful grasp of the subtleties at the heart of his folk/soul hybrid. Produced by Pharrell Williams, “Love Is the Answer” is a big and brassy old-school soul anthem, while the haunting “Ticking Bomb” wraps its anti-war message in ghostlike backing vocals, intensely ominous rhythms, and Blacc’s pained but soaring vocal performance.

Blacc’s stripped-down and bravely intimate version of “Wake Me Up” also appears on Lift Your Spirit, as do tracks as eclectic as the strutting, guitar-fueled “Can You Do This,” the blues-meets-hip-hop stomper “The Hand Is Quicker,” and the smoldering R&B slow jam “Red Velvet Seat.” And, fulfilling Blacc’s central mission of instilling joy in his listeners, songs like the gospel-inspired, groove-heavy “Lift Your Spirit” and the harmony-soaked epic “Eyes of a Child” are each a powerfully pure celebration of life and love.

Raised on the boundary-pushing hip-hop of acts like Public Enemy, The Pharcyde, and De La Soul, Blacc developed a fierce admiration for such soul musicians as Donny Hathaway and Marvin Gaye and folk-rock singer/songwriters like Joni Mitchell and James Taylor as a teenager. “I got interested in folk and soul because of the songwriting,” he says.

“Especially with folk, I was really drawn to the way those artists turned their songs into storytelling.” Tuning into Lift Your Spirit, the influence of folk-rock pioneers becomes evident in Blacc’s artful layering of disparate yet deeply linked themes in his lyrics.

On the hard-hitting yet tenderly confessional “Here Today,” for instance, Blacc both portrays the struggle involved in making a living as a musician and meditates on the ephemeral nature of existence, cleverly weaving together images of cockroach motels, lonely nights, tattered shoes, and empty pockets. And on “Ticking Bomb,” Blacc laments consumer-crazed culture and environmental destruction by laying down such piercing one-liners as “The future is a dying art.”

“I’m really proud of my development lyrically,” says Blacc, noting that one of his greatest aspirations is to make it into the Songwriters Hall of Fame.

And while Blacc thrives on collaboration in creating the sonic elements of his music—including “those long nights when everybody’s in the studio and we’re having such a good time that we just keep working when I really should be getting some sleep”—he’s adamant about taking sole responsibility for the lyrics that end up on his albums. “All the lyrics are me,” he says. “I really only ever want to sing lyrics that I’ve personally written.”

Carefully crafting lyrics to create impactful music has been essential to Blacc since high school, when he first broke into the indie hip-hop scene. Back then Blacc and his partner DJ Exile formed a duo named Emanon and quickly became cult favorites in Los Angeles, largely due to their heavy inventiveness in working with jazz samples and breakbeat loops.

Going solo in 2003, Blacc soon signed to indie label Stones Throw and transformed from rapper to singer—albeit without shedding his hip-hop spirit or sense of social consciousness. Three years after the release of his solo debut Shine Through, Blacc began work on the record that would change his life and career: Good Things, an album certified gold in the UK, France, Germany, and Australia, among other countries.

Along with “I Need a Dollar” (the platinum-selling single that was selected as the theme song to HBO’s How To Make it In America), Good Things included the singles “Loving You Is Killing Me” and “Green Lights.” The European success of both tracks led to interest from Simon Fuller’s XIX Entertainment, with whom Blacc eventually landed a management deal, a move that paved the way to the 2012 signing of his recording contract with Interscope Records.

With “Wake Me Up” having sold more than 2,867,000 copies in the U.S., Blacc notes that one of his main ambitions is to use his surging popularity to affect social change while continuing to infuse his music with a mindful positivity.

“What it comes down to in my songwriting is trying to tell the story of the underdog and all the obstacles they have to overcome in this life,” says Blacc of the songs that make up Lift Your Spirit and his overall body of work.

“The stories in my songs are about the common individual and all the struggles they’re dealing with everyday, and also all the hopes and aspirations that they have. It’s about reflecting all of that, and at the same time getting people to sing along and feel good and just celebrate being here.”

The show at Clive Bar on Wednesday, March 12