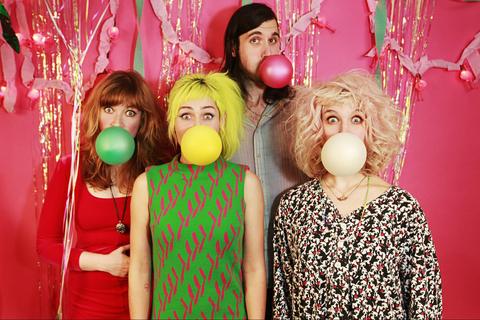 Like a fluorescent-lit snack-aisle oasis in some desolate interstate road stop, brimming with Skittles and limited-edition Sno Balls, Tacocat's Easter-egg-hued pop-punk-pop is bubblegum-sticky with hooks, bound to brighten up the most drab stretch of bummer backroad.

The band's four-person, seven-layer-burrito came together organically: Lelah Maupin (drums) and Eric Randall (guitar) met in their native Longview, WA—two hours south of Seattle, the very town that Green Day named their breakout debut single after. Lelah's family room was wallpapered with framed Magic Eye posters, hence "Stereogram," the cross-eyed love letter to that bizarre ‘90s optical fad. She met lanky Eric while both worked at Safeway, wearing the chain's distinctive navy aprons before breaking north to Seattle. Eric's band The Trashies practiced and played in the basement of the 24/7 House in the Central District, where Long Beach, CA native Bree McKenna (bass) was living, amongst the dust, boxes, and spiders. Lelah met Butte, MT native Emily Nokes (voice, tambourine) in one excruciatingly early/boring graphic design class, slipping her a doodled-upon note; she soon noticed Emily's big voice while she sang along with R. Kelly on the radio. Emily and Bree hit it off one sloshy night at the Comet. Eric impressed Emily with his reenactments of scenes from Anaconda. Sometime around 2007, via countless raucous house party shows, the legend of Tacocat was born.

The foursome would quickly make a name for themselves with their simply energizing power pop, drawing on classic Northwest energy with an uncommonly upbeat, surfy swag that could only come from gray skies and hydroponic sunshine. Their sly and unabashed ‘90s revivalism has, in the past, found the band pondering Evan Dando and Waterworld—and Bree herself explains finding about riot grrrl via Napster and Julia Stiles in 10 Things I Hate About You. They've described themselves variously as "Feminist sci-fi" and "Equal parts Kurt and Courtney"; oh well, whatever…NVM.

NVM—Tacocat's second full-length album and first for Hardly Art, opens up like some mystery shoebox, wistful, instantly nostalgic: snapshots of mortifying exes ("You Never Came Back") and sketchy party situations ("Party Trap"), maybe a postcard with an alien smoking a joint. Cigarette cellophane-wrapped weed nugs, pain pill crumbs and wrapped tampons ("all the girls are surfing the wave, surfing the crimson wave today”), all serve as a roadmap through Tacocat’s bong-ripped reminiscences, scenarios all-too familiar and hilariously improbable. There's the notoriously inconsistent #8 Metro line ("F.U. #8") and the accountability-allergic, black-clad brick-heavers of "This Is Anarchy." The protagonist of "Psychedelic Quinceañera"—based on Bree—just wants to dance with rainbows, mind-expansion style, instead of having to wear a frilly dress in front of her whole family. Emily daydreams of a "Bridge to Hawaii," where even the destitute could walk their asses to paradise—before being snapped out of it by cat-calls from construction workers, business dads, and drunk hobos ("Hey Girl"); sweaty jerks telling her that she should smile!

NVM all that, though: you should, and will, smile—either a wry little corner-lifter or a big ear-to-ear equator—and shake what's yours, when you hear the whippet-smart latest album from the world's favorite palindromic band. Text a friend.