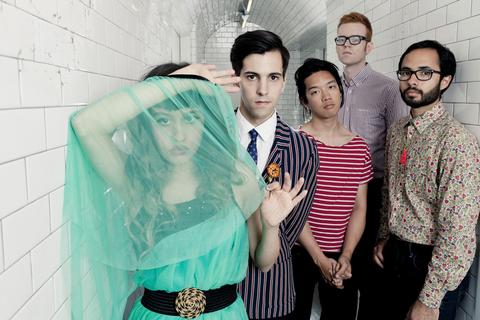 With a collection of songs that web male-female vocals of couple Zahira Gutierrez and Cody Swann, as well as pop-infused percussion and string work, Wild Moccasins, a quintet of 20-somethings from Houston, TX, offer a sound that balances a musical guile beyond the band’s years.

Wild Moccasins are perhaps best known in their native Texas for their uncanny ability to sell-out live shows. The mere release of their EP,Microscopic Metronomes & then Full Length, Skin Collision Past,actually resulted in some significant amount of press noting how they are one of the few local acts that have no trouble selling out a show.The explanation behind their passionate fan base can be found in the one aspect of Wild Moccasins that is most prevalent: their energy. The passion for music that all five members emit both in the studio and on the stage is one to marvel at.