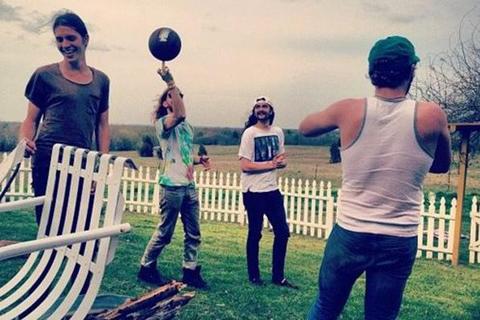 Fly Golden Eagle has been going strong for over 5 years. Starting with Ben Trimble first playing shows solo with a boombox and tape-recordings, it has since evolved into a full-fledged band that has released 3 albums and an EP. Richard Harper, Mitch Jones and Matt Shaw flesh out the foursome.

They've traveled the Silk Highway to help in The Resistance of the Propagators of the Pinkest Floss, as well as the nation of Canada, where the people love their music, but the Government does not. Their songs are meant to be titillating, multilateral, and other fun, vintage buzz words. Fly Golden Eagle sincerely tries to find it's place in the cosmos and the sentient beings on earth. They are greedy for the big synthesis and are highly listenable.

Fly Golden Eagle is currently touting their latest, psych-funk release, "Swagger", wherever they go and are done with their follow-up, "Quartz", to be released soon. In the past year the band has toured with Alabama Shakes, Edward Sharpe & the Magnetic Zeros, Dr Dog, Arctic Monkeys, Clear Plastic Masks and Chrome Pony. See them outside and in the sun.