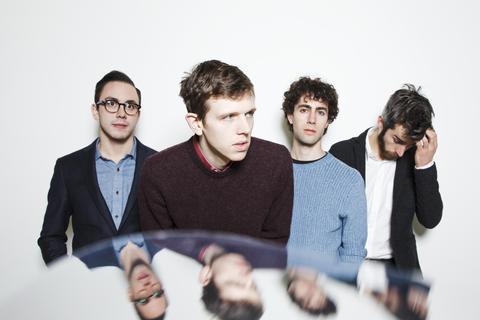 If you’ve ever read a comic book, watched a science fiction movie, played freeze tag, or undertaken a top-secret intergalactic space mission, then you know all about the value of a good force field. Tokyo Police Club surely do, and in the four years since the band’s last album, our brave heroes from Toronto spent several long winters and many manic nights in their own fortress of solitude, learning to deflect that which would do them harm or lead them astray and to respect and to trust those they knew best: each other.

“We struggled with finding our spot as a band and owning what we were,” says lead singer/bass player and principle songwriter Dave Monks. “Everyone expected us to come out with another record like (2010’s) Champ, but we didn’t feel comfortable going on the same road we were on. We wanted to go somewhere else; an upward move, not lateral, so we starting writing and looking around for something new.”

But just because something is new doesn’t mean it’s also fresh. Today’s music world is over-saturated; it’s crammed to the gills with fleeting spotlight grabs, quick bucks, tired regurgitation and trend after soulless copycat trend, sure, but also with talented acts, shrewd maneuvers and catchy choruses that drop your jaw with their deceptively simple brilliance. Tokyo Police Club (Monks, keyboardist/guitarist Graham Wright, guitarist Josh Hook and drummer Greg Alsop) knew that a new direction could be their key—but that choice would not be without its pitfalls.

While writing, the band began to feel more and more isolated. Despite lofty goals and a fervent fan base, Champ had only bumped them up to the next ladder rung, not the express escalator to the top they may have expected. Days and weeks sometimes went by without any band activity. For the first time, two members moved away from Toronto (Monks to New York City, Alsop to Boston). “At times it felt like people maybe lost faith,” says Monks. “And it really came down to the four of us gelling. When we came back to the surface, everyone was really excited again, like they had never left. But we had to go on this solo band journey.

“On Champ we were exploring new corners of our band,” continues Monks, “and a lot of it was unintentional, happy accidents. This time around we wanted to have lots of those. We made an effort to make our songs more direct and understandable and maybe cross over to people who wouldn’t normally listen to Tokyo Police Club. And then it was that act of balancing, keeping it ‘us,’ making something universal about it.”

Their first decision was to provide themselves with the time they needed to make something lasting. “We spent so long on Forcefield but we had to, there’s no other way it could have gone down,” says Graham Wright. “We did everything we needed to do to make the record. And we were bemoaning how circuitous most of our process usually is: we go on this weird path and then three days later we end up exactly where we started. But we realized that you have to allow yourselves to go on these insane tangents because every once in a while they make you put three songs together into an eight-minute medley that’s the best thing the band ever did. And if you were too busy trying to be simple and to follow your gut, you would never do that.”

The eight-minute medley to which Wright refers is “Argentina,” Forcefield’s lead track, a polished, earnest, high-octane and slow-burning epic that began as three separate songs in the same key that were stitched together into a seamless conglomeration nearly four times as long as some of the earliest Tokyo tunes. It’s a statement, for certain, but in the context of the process that birthed it, the song serves as more of a symbol of the foursome’s renewed confidence and trust in each other than an experimental jumping-off point.

The eight tracks that follow sound like the Tokyo Police Club you know and love but somehow manage to reach a little higher into the rafters. The genuine spirit in the catchy choruses of lead single “Hot Tonight” and “Toy Guns” reflects the anthemic music that all four bandmates were inspired by while recording, and “Miserable” features a concert-ready refrain sure to infuse crowds of all sizes. This is a watertight sound that only a band of best friends could make, a band who after ten years of playing music together and over a decade and a half of friendship wrapped themselves up in a force field and gave it their all, realizing who they are in the process as well as what their songs bring to their audience and to each other.

“We became aware that the objective on the songs was to relate,” says Monks. “It wasn’t about being cathartic or poetic or shrouded in mystery, it was just to be super open. I’ve done that lyrically and we’ve done that musically as a band; we’ve been more forgiving to these songs and let them just be the kind of songs they are and not tried to make them flow with the trends. We’re stoked on this record—we think it’s the best record on the planet right now.”