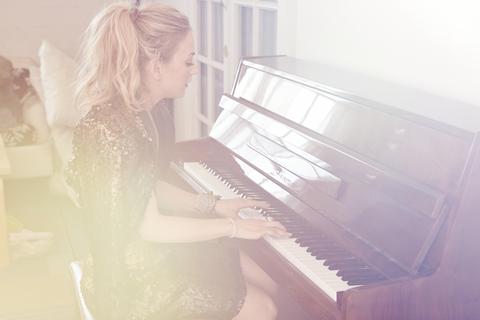 Emily Kinney is an actor and songwriter best known for her role as Beth Greene on AMC's hit television series The Walking Dead. Kinney's musical talents have been featured on TV, in musical theater, and in her own releases. A Nebraska native, she studied theatre at Nebraska Wesleyan University and New York University, staying in NYC to pursue her acting and music career. Kinney worked in theatre off-broadway and regionally before landing a role on Broadway in the musical adaptation of Spring Awakening. In 2011 she released her debut EP, Blue Toothbrush, and started working on The Walking Dead where she would later become a series regular. Her singing has been prominently featured on the show, notably a moving cover of Tom Waits's "Hold On", and a haunting rendition of the traditional Scottish song "The Parting Glass" with cast-mate Lauren Cohan, the latter of which appears on The Walking Dead: AMC Original Soundtrack, Vol. 1. Kinney has also been seen in reoccurring roles and guest appearances on television series such as Law & Order: Criminal Intent, Law & Order: SVU, The Good Wife, and The Big C.

In between shooting the upcoming season of The Walking Dead, Kinney is currently writing her next record in Los Angeles and New York. She regularly performs at New York City's Rockwood Music Hall and LA's Hotel Café. She can also be seen this fall in the movie 'Concussion' released nationwide Oct. 4th. On October 22nd, 2013, Kinney released her second EP, Expired Love. With the release of Expired Love, Kinney fully realizes her musical identity and firmly establishes herself in the indie-pop world. The EP features seven original songs, all written by Kinney, with production by Caleb Shreve and Conrad Korsch (bassist, Rod Stewart), and mixes by Mikal Blue (Colbie Caillat, One Republic, Toad the Wet Sprocket).