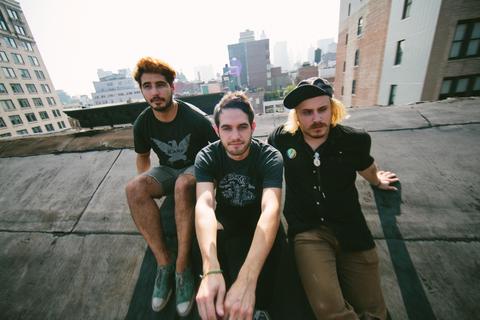 
together PANGEA do rock ‘n’ roll as it was meant to be – raw, unpredictable, and probably dangerous, but also blazing with intelligence, emotion, and edgy experimentation. The Los Angeles-based trio made their bones as purveyors of post-millennial punk, but with their third full-length release – and Harvest Records debut – BADILLAC, they pay their debt to the supersonic 90s rock that first inspired them. The band has not sacrificed a spurt of precious energy, instead integrating nuance and dynamic momentum to songs like “No Way Out” and the undeniably badass title track. The volcanic riffs and massive melodies are matched by an equally provocative lyrical stance, with songs like “Sick Shit” and the album-closing “Where The Night Ends” casting an acerbic eye over the wreckage of the party they helped start – it’s 3am and the drunken fun has given way to sexual panic, anxiety and self-doubt. Slightly stoned but by no means slack, BADILLAC reveals together PANGEA to be both confident and surprisingly committed, their audacious ambition already impossible to contain.

“It might be confusing for people, assuming we’re like this garage punk band and then hearing this record,” says singer/songwriter/guitarist William Keegan. “But we really don’t want to get trapped at all.”

Keegan first started writing and recording in his Santa Clarita bedroom, his teenage tapes eventually coming to full flower with the aid of bassist Danny Bengston and drummer Erik Jimenez. Known then simply as Pangea, the band played countless beer blasts in and around CalArts, their boozy mayhem and breakneck pop hooks quickly earning them frenzied crowds throughout the Southern California DIY scene and beyond. A string of seven-inches, cassettes, and LPs – including 2011’s ace second album, LIVING DUMMY, released by Burger Records and The Smell’s Olfactory label – followed, as did gigs alongside a veritable who’s-who of like-minded rockers, including Ty Segall, Mikal Cronin, Wavves, and The Black Lips (not to mention 2013’s epic “Burgerama Caravan of Stars” US tour).

BADILLAC was recorded with their longtime producer/engineer Andrew Schubert over three intensive sessions at his Tarzana studio, their roster augmented by second guitarist Cory Hanson (of the electronic pop outfit, W-H-I-T-E). While many bands in their position would have simply continued banging out the party punk, together PANGEA decided to throw a curveball at themselves and their fervent fanbase.

“We wrote like 30 plus songs for this record,” Bengston says, “half of which have the same punky bubblegum vibe of our last record. Then we had this other batch of songs, a little more melancholy, a little heavier, a little darker. I think in the end we just decided to try to not make the same record twice.”

“When I write, there are certain songs that I feel fit the band,” Keegan says, “and then there are songs where it doesn’t feel like they fit. At some point, I was like, maybe we should try some of the songs that don’t necessarily fit. Because I realized that they do fit – they’re just different.”

Though Keegan cites such unexpected heroes as Pete Seeger and 21st Century K Records artists like Little Wings and the Microphones, he fully fesses up to BADILLAC’s most primal inspirations. Indeed, songs like “Why” and the cello-laced “No Way Out” fuse classic post punk ambivalence with fist-pumping stadium rock, their neurotic hooks, throat-rending vocals, and fat, distorted riffs hearkening back to the glory days of the alternative nation.

“To me, the album is so obviously influenced by the shit that I was listening to when I was 16,” Keegan says. “Growing up in the 90s, all that stuff – Nirvana, Smashing Pumpkins, Weezer. It wasn’t conscious, the album just sounds like that. It feels like that music is etched in deeper that music I’ve listened to as an adult. For whatever reason, the music you listened to when you’re confused and young gets in deeper than anything you might listen to later.”

BADILLAC also sees together PANGEA stepping away from their association with a much-hyped scene they believe too often revels in its own idiocy, Keegan’s wry lyrics pushing both their music and subject matter towards unsettling themes of impotence, fear, ennui, and detachment.

“We think less and less about how we fit into this garage punk scene that we never even technically felt a part of,” Keegan says. “We just kinda get lumped into that. I’m not really stoked on what a lot of those bands are saying, there’s a lot of misogyny and stuff I’m not into.”

Like any angst-ridden tunesmith worth his salt, Keegan also directs his gaze inwards, coming to turns with his own cynical view of relationships on songs like the mordant “Offer,” their cracked melodies and jaundiced skepticism fueled by his recent romantic struggles.

“I went through a really difficult relationship where we were breaking up every three months for four years,” he says. “At the end of it, I was just like, “This is never gonna work.’ It was pretty intense and I think that informs a lot of the songs on the album.

“It’s kinda funny,” he adds. “As soon as we finished this record, we broke up for good.”

BADILLAC will drive together PANGEA through 2014, their imminent plans essentially consisting of touring until they drop. Nevertheless, the band finds themselves in the unprecedented position of having to ponder the future.

“We’ve been discussing where the next record is gonna go,” Bengston says, “we still haven’t put our finger on it yet.”

“It’s weird,” Keegan says, “because we never had to have those formal discussions, like, ‘What should the next record sound like?’ It’s always been pretty natural. Hopefully that’s what’ll end up happening again.”
November 2013