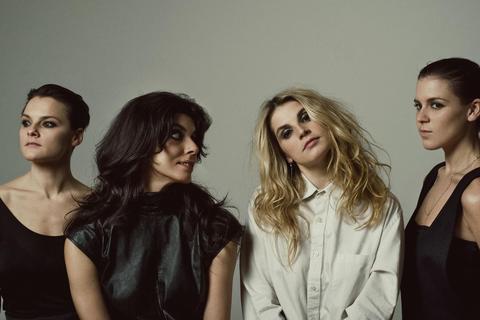 Any great band evolves. And so even though TEEN had certainly made some excellent, acclaimed music in their first few years of existence, they knew they were still discovering their voice — in more than one sense of the word.

TEEN have found that voice on their brilliant second album, The Way and Color, one reason why it's such a stunning creative breakthrough. Singer-multi-instrumentalist Teeny Lieberson's voice is starkly highlighted, but the whole album is a conversation between Katherine Lieberson's crafty, minimalist drumming, Boshra AlSaadi's lithe, sinuous bass lines, and Lizzie Lieberson's irresistible synth hooks. The music is filled with overlapping countermelodies of vocals and synth lines; even Katherine's drums are hooky, so that the songs become ingenious interlocking sonic mantras. Imagine an integration of playfully off-balance rhythms and orchestrated dissonance, spaciously filtered through TEEN’s distinctive musical vision. And listen closely: the tracks are filigreed with all kinds of fascinating events buried deep in the mix.

Teeny played keyboards and sang in Here We Go Magic before founding TEEN in 2010. She self-recorded and self-released the beguiling lo-fi Little Doods EP the following year, then formed a band that included Katherine and Lizzie (yes, they're all sisters), and signed to Carpark for 2012's In Limbo. Produced by Sonic Boom (Spectrum, Spacemen 3), In Limbo encompassed trancey but kinetic pop and sprawling, ethereal ballads, and everything in between. Rolling Stone listed its opening track "Better" as one of the "50 Best Songs of 2012." The Carolina EP followed in 2013 and it was even more varied and accomplished; the band was growing by breathtaking leaps and bounds. But in retrospect, it was all prologue for the remarkable The Way and Color.

The Way and Color has its share of darkness — fear, regret, and loss are all in the picture — but it's always redeemed by the sheer soulfulness and powerful ingenuity of the music, and the way Teeny always sings even the darkest lyrics with rhythmic and melodic daring. Listen to the way "Rose 4 U" only gets more triumphant when things go bad, or how a stately horn coda transcends the sorrowful mood of "All the Same." "We're living in a really aggressive time, a not very thoughtful time," says Teeny. "And when I finally listened to the album all the way through, I felt proud that we made something that made me feel uplifted. I hope this music will make people feel some happiness and joy."

The Way and Color does sometimes recall the sound of post-millennial R&B, but, more importantly, TEEN itself embodies one of that era's signature features: bold, visionary, female musicians. It's intelligent, heartfelt music, artfully expressed in TEEN's singular voice.