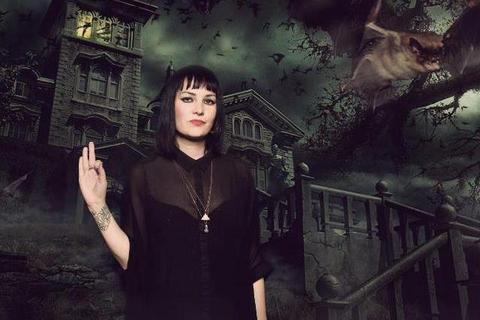 Star Eyes' name is synonymous with raw, dirty underground bass music. A founding member of the world-renowned Trouble & Bass crew, this NYC bat girl causes mayhem around the world with DJ sets that swiftly connect the dots between house, grime, dubstep, and American underground sounds from Miami, New Jersey, Chicago and beyond. Meanwhile, her original music is an alluring mix of goth and rave influences whipped into a style she calls “haunted house”—her original tracks appear on T&B, Ghostly, Frite Nite, and Mixpak and she has collaborated with Drop the Lime, Flinch, UFO!, Genesis P. Orridge, and many others.

Though her style moves across eras and genres, her aesthetic is continually inspired by jungle, old-skool hardcore, and the warehouse parties in which she was raised. Star Eyes is an alumni of Red Bull Music Academy (2003, Cape Town) and the former editor-in-chief of XLR8R Magazine, as well as a noted music journalist and curator. She has played at Sonar Festival, EDC, Fabric, Paris Social Club, and at music festivals from Camp Bisco to Burning Man. With world-class skills and a troublemaking attitude to match, Star Eyes has definitely earned the title “Brooklyn’s queen of heavy bass.”

The show at Barcelona on Saturday, March 15